Celltrion gets nod for 2nd biosimilar in local market

Celltrion gets nod for 2nd biosimilar in local market 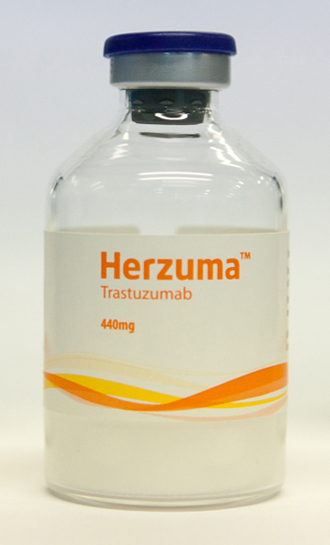 Celltrion, a Korea-based biopharmaceutical company, said yesterday it has won approval from the Ministry of Food and Drug Safety (MFDS) for its anti-cancer drug Herzuma, a biosimilar version of trastuzumab, known by its brand name Herceptin. The patent for Herceptin was held by the Swiss drug firm Roche.

According to the company, sales of Herzuma will begin within the first half of this year after it goes through administrative procedures, including receiving an official notification by the Ministry of Health and Welfare.

“Specifically, the MFDS declared that Herzuma has been approved for the treatment of ‘early and advanced HER2-positive breast cancer as well as advanced stomach cancer,’” the company said in a statement yesterday. “Herzuma activates the body’s immune system and suppresses HER2 signals to target and destroy the tumor.” HER2 stands for Human Epidemal growth factor Receptor 2 protein.

In pharmaceuticals, there are biosimilars and generics, both of which are copies of original, innovative pharmaceutical products. Biosimilars are different from generics in that they copy products made from substances extracted from the human body while the latter copies chemical ingredients of patented drugs.

“Herzuma’s approval is another major milestone for biosimilar development as this approval marks the first approval of oncology biosimilar mAb with global clinical trial results,” the company said.

Celltrion started its development of Herzuma in January 2007 and has conducted global clinical trials involving 558 cancer patients from August 2009 to December 2011. The trials were conducted in 18 different countries including Korea. The company said it has plans to ask for approvals in other markets.

“The original product of Herzuma is trastuzumab, which generated sales of over $6.3 billion globally in 2012,” said an official from Celltrion. “The Korean domestic market size is estimated at approximately 80 billion won [$75 million].”

Pharmaceutical companies like Pfizer and Samsung Bioepis are conducting their own research and clinical trials to develop biosimilars of Herceptin.