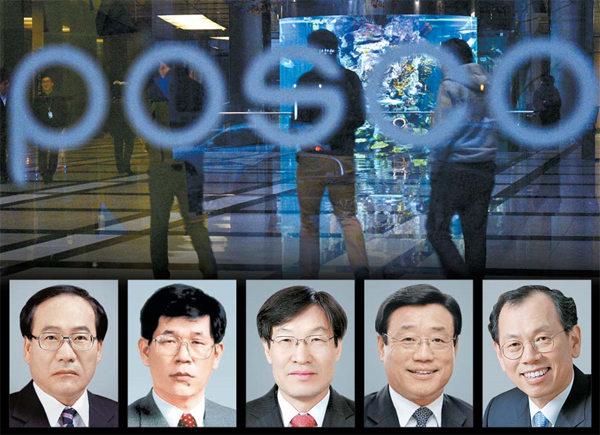 Five finalists have earned a shot at becoming the next leader of Posco as the nation’s largest steelmaker officially launched the committee to select the next chairman and CEO.

Posco yesterday held a temporary board meeting and approved the shortlist recommended by its “succession council.”

The CEO candidate recommendation committee, comprised of six outside directors, will review the candidates’ qualifications and interview them before selecting a finalist.

The committee’s choice is expected to be revealed by Feb. 28, because the company’s rules state that the final candidate should be announced at least two weeks before a meeting of shareholders.

Experts have been saying the screening process will focus on whether the candidate has the leadership qualities and management ability to guide Posco, which faces challenges due to the weak yen and an oversupply of steel.

Posco’s profitability has also been slipping since 2011. Its operating profit was 3.6 trillion won ($3.3 billion) in 2012, barely half the level of 2011, and last year’s operating profit is estimated to be even less.

Among the five candidates, Oh is the only one from outside Posco. The 61-year-old is known as a trade and commerce expert, previously holding positions as vice minister of commerce, industry and energy and vice chairman of the Korea International Trade Association.

If Oh, who has been leading Kotra since 2011, becomes the next CEO, it would be the first time Posco has selected its leader from outside the company since it was privatized in 2000.

Among the four candidates from Posco, three have engineering backgrounds. Kwon, who joined the steelmaker in 1986, has worked as chief of the company’s technology research institute and Research Institute of Industrial Science and Technology.

Kim, who along with Kwon is an alumnus of Seoul National University, joined Posco in 1975 and held various positions such as head of Pohang Steel Mill and the Carbon Steel Business Division.

The 61-year-old has been president of Posco Chemtech, an affiliate that specializes in refractory manufacturing, along with lime and environment reformation product manufacturing.

Chung, who graduated from Hanyang University majoring in electrical engineering, joined Posco in 1976 and has held positions like vice chief of Gwangyang Steel Mill.

Unlike these three candidates, Park has a background in marketing and sales.

The 63-year-old has been employed by the steelmaker since 1978 and has headed the public relations and manpower management unit. He was also president of Posco ICT. The Korea University graduate has been leading the group’s educational foundation since 2012.

The final candidate could be chosen as early as next week, industry insiders speculate.

The finalist is believed to be chosen through a conclave system like the Vatican uses for the election of the pope.

Under the system, cardinals and directors vote until the winning candidate achieves a two-thirds majority of ballots cast.