‘Nut Job’ underwhelming, even with Psy

‘Nut Job’ underwhelming, even with Psy 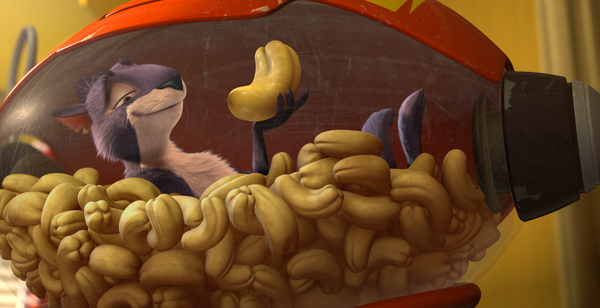 This image released by Open Road Films shows Surly, voiced by Will Arnett, in a scene from “The Nut Job.” [AP/NEWSIS]

Not all rats look exactly alike, even animated ones. But there’s a real resemblance between a rat in “The Nut Job,’’ the new film by Peter Lepeniotis, and Remy, the main character in “Ratatouille,’’ that wonderful 2007 Pixar film.

And that’s not a good thing for “The Nut Job,’’ because anyone who makes that connection will be likely also remembering how “Ratatouille’’ showed so beautifully that an animated film, done with the right skill and imagination, can be equally enchanting to kids and adults. Something that “The Nut Job,’’ a decent but frankly forgettable entry to the animal-centered animated film oeuvre, does not.

The movie certainly looks nice. Colors are vibrant, particularly the reddish autumn shades of trees in Liberty Park, in fictional Oakton City, where much of the action takes place.

There’s a lovely moment where shimmering water reflects the leaves above. And the whole thing has a period feel - mid-20th century - which is appealing, though confusing, too, when you see characters break into what looks like very 21st-century dancing at one point.

Like most animated films these days, “The Nut Job,’’ a joint Canadian-South Korean-U.S. production, trades on its celebrity voices, which here include Katherine Heigl, Brendan Fraser, Will Arnett, Maya Rudolph, and, most recognizably, Liam Neeson, who sometimes sounds like he could be on a Shakespearean stage.

Not that you could call this dialogue Shakespearean. Or even witty. This being a film about squirrels and their nuts, kids will enjoy the “nut’’ puns, and parents will groan.

“Let’s not get too nutty about this,’’ one character says. “Sorry, I went a little nuts,’’ says another. The movie’s slogan: “No nuts, no glory.’’

Well, at least there’s an interesting digression on the existential nature of peanut brittle. Is it, someone asks, a nut or a candy?

“Both,’’ comes the considered reply.

The story, based on Lepeniotis’s short film, “Surly Squirrel,’’ is simple: The animals in Liberty Park, ruled by a gruff raccoon (Neeson, of course) ominously just named Raccoon, are facing a severe nut shortage just as winter is approaching.

Surly the squirrel (Arnett), who thinks only of himself, has somehow set fire to the winter stockpile. (Watch for the nice shot of popping corn kernels from an exploding tree - it will remind you there’s a reason you’re wearing those 3-D glasses.)

But Surly doesn’t seem willing to help solve the situation, and he’s banished from the park to the city. There, he discovers a nut shop - cashews, peanuts, hazelnuts, you name it. If he can snag that booty, he’ll be golden for the winter, though that won’t necessarily help out his furry friends in the park, led by the feisty Andie (Heigl).

Of course, there’s a big complication. A group of human lowlifes plotting a bank heist have their own connections to the nut stash, for reasons unrelated to nutrition.

So who’ll win out, the human criminals or the park animals? And will Surly remain, er, surly and uncooperative, or will he work with the others? And what about Raccoon? Is there something menacing in that deep, husky voice?

Parents may concern themselves with these issues, while kids may simply be focusing on the puns, and oh yes, the fart jokes.

And if they get tired of those, there’s always the animated Psy - yes, that Psy - at the end, singing and dancing his way through “Gangnam Style’’ as the credits roll. Never mind that this movie is supposed to take place some 50 years before the song came out. It’s all mildly entertaining - if slightly nuts.

The movie is released in America tomorrow and in Korea on Jan. 29. AP