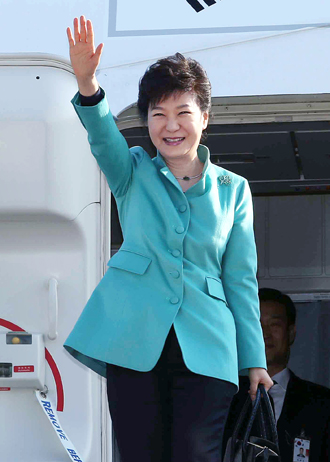 President Park Geun-hye said she regrets that North Korea continues to refuse to discuss humanitarian issues with the South, including the reunions of war-separated families.

During an interview with the Indian national broadcast network Doordarshan on Jan. 9 in the Blue House, which was broadcast yesterday, Park said: “In my own New Year’s statement, I proposed holding a reunion of separated families as a good first step. But, unfortunately, the North Koreans have not accepted that proposal.

“In fact, this is an issue that is humanitarian in nature and one that we could lend great urgency to,” she said. “But the North Koreans have unfortunately and regrettably rejected that offer.”

In a New Year’s address at her first presidential press conference on Jan. 6, Park officially proposed government-level talks to Pyongyang to discuss reunions of families separated during the 1950-53 Korean War.

In September 2013, the South Korean president made the same proposal ahead of the Korean Chuseok holiday, which is equivalent to Thanksgiving in the United States. North Korea initially agreed to that proposal, and the reunions were set for Sept. 25 to 30, but they were abruptly called off four days before schedule.

“In their New Year statement last year, the North Koreans also mentioned improving inter-Korean relations,” she said. “But in reality they engaged in nuclear testing, and they were also on the verge of closing down the Kaesong industrial park by unilaterally withdrawing all the workers.”

Despite soured relations with Pyongyang, Park vowed to offer humanitarian aid for the impoverished state’s children and underprivileged, and to make efforts for reunification.

“Despite the numerous difficulties we confront, we would not like to despair at every turn but will patiently work towards laying the groundwork for unification of the Korean Peninsula,” she said. “On the one hand, we will endeavor to promote denuclearization of North Korea, and, at the same time, we will continue to provide humanitarian assistance and expand people-to-people exchanges between the two Koreas.”

Her comments were her first official response to North Korea’s rejection before the Lunar New Year of family reunions.

During her first year in office, the South Korean president has promoted a policy of “trustpolitik” or a “trust-building process on the Korean Peninsula,” a two-track approach in dealing with North Korea that maintains the former Lee Myung-bak administration’s economic sanctions but urges the regime to return to the negotiation table.

North Korea showed some conciliatory moves, proposing talks on resuming tours to the Mount Kumgang resort and the family reunions. But the regime backed away after the South Korean government said it had no plans to restart the tours without an apology for a 2008 shooting that killed a South Korean tourist. Park held the interview with Doordarshan in advance of her arrival in India yesterday for a four-day state visit.

In terms of the economic cooperation between the two countries, Park described the safety of Korea’s nuclear power plants in an effort to pave the way for Korean companies to build power plants in India.

“I believe Korea can become a very good partner for India not only in terms of building and operating nuclear reactors but also in the field of nuclear safety,” Park said. “In nuclear safety, I would note that ever since 1978, when Korea first began to operate a commercial nuclear reactor, we have not experienced any instance of massive or large nuclear accident.”

When asked if India should become a permanent member of the UN Security Council, Park said it would be “more desirable” to increase the number of nonpermanent members.