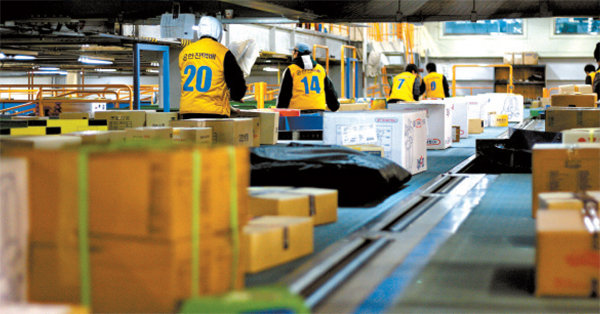 Workers at Hanjin’s distribution terminal in Seoul prepare packages for delivery. Shippers are hiring more employees to handle an increased number of packages due to the Lunar New Year holiday. Provided by the company

With the Lunar New Year holiday only about two weeks away, shipping companies are adding manpower and resources to effectively deal with the increased volume of packages.

According to CJ Korea Express, the nation’s largest ground shipper, the volume of packages around the Lunar New Year usually doubles or triples. The affiliate of CJ Group designated a “special delivery period” from Wednesday to Feb. 4 and ordered all employees to be on call.

The company said volume is likely to be the heaviest Monday to Wednesday, though it will handle an estimated 3.2 million packages on Feb. 3 alone.

“It will be better for customers to send their parcels no later than this week to secure on-time delivery,” said a spokesman from CJ Korea Express. “If waiting for delivery personnel to pick up a package is inconvenient, customers can also ship packages through many convenience stores.”

To handle the increased volume, CJ Korea Express said it has hired temporary workers to boost its manpower by 20 percent and will borrow delivery vehicles from some of its suppliers.

The company is focusing on maintenance of its delivery cars and is making preparations for possible snow.

Korea Post also said it is adding 2,100 employees. The state-run delivery service expects to handle 13.7 million packages, up 16 percent from a year ago, from this week to the Lunar New Year holiday period that begins Jan. 30. Hanjin said that it is also adding employees.

Industry insiders advised customers to take advantage of arranging for shipment on the companies’ websites as call centers are typically flooded with twice their usual number of calls.

Meanwhile, shippers said the nation’s new address system will not be a big problem since it has been training delivery employees. The new address system, which went into effect this year, requires people to put the street name rather than the neighborhood, which ends in “dong.”

Shippers said that even with customers’ addresses under the old system, they will be able to make deliveries, but to prevent mistakes and delays, customers should include the recipient’s cell phone number.

According to a recent survey by the Ministry of Security and Public Administration, only 17.2 percent of people said they are using the new address system.