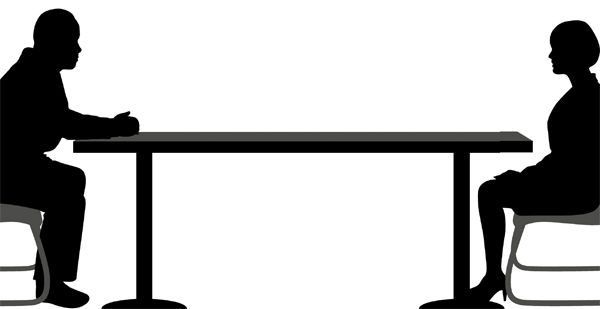 As Samsung Group joined other conglomerates in reforming its recruitment system to put less emphasis on so-called specs, corporate recruiters and employment experts advised young people to base their job search on what they enjoy doing rather than getting into a specific company.

Kim Min-ji, 23, has been following her passion through her college years and is about to realize her dream of being a mobile application developer. The English and integrated studies major at Scranton College, Ewha Womans University, first dreamed of building her own mobile application in her sophomore year during an IT-humanities convergence course.

As smartphones started to spread, she fell in love with apps and kept looking for opportunities to learn more about them. She joined and became a chief developer at the Ewha App Center and jumped at the chance to intern at SK Planet, the app arm of SK Telecom.

Kim decided to continue her studies through graduate school at Yonsei University before entering the job market.

“I’ve never studied abroad for language training or prepared for those typical specs, like English exams and community service. I just followed what I like and opportunities were there in front of me,” says Kim.

In the past, job seekers started by deciding which conglomerate to apply to because there was on universal standard: academic excellence.

But employers have started to shift their criteria because they need employees like Kim, who are prepared to work right away thanks to practical experience and a longtime interest in the job area.

“Now, job preparation is about having your own story, not specs,” says Byun Ji-sung, manager at Job Korea, an employment search portal. “In a bid to write your own story, you first need to know what you want to do. Then you strive to become an expert in that area.”

According to a Job Korea survey of 316 recruiters released yesterday, 93 percent said applicants have excessive specs. Almost half of respondents picked job certification as the most significant spec, followed by college grades and internships. They thought language training, experience abroad, community service and graduating from a prestigious college were useless.

The recruiters commented that young job seekers have to shift their focus from building a perfect but largely uniform resume and cover letter package to a portfolio that genuinely shows who they are and their capability, passion and curiosity. Recruiters pointed out that job seekers tend to spend too much time and energy building academic credentials that are excessive compared to what jobs actually require.

Byun also advised job seekers not to think about where they are going to apply. She explained that the crucial point is choosing the kind of job they want to do and concentrating on the right kind of specs. 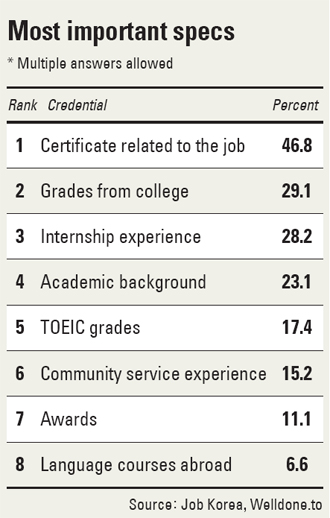 “It’s not a matter of black-and-white separation between academic and field-based specs. Some jobs need more academics than others, which is why some job positions like engineering or research usually require higher college grades and English exam scores,” she says. “Samsung’s recruitment system was changed to reflect that.”

Meanwhile, job seekers are still not free from the pressure of maintaining academic excellence, because many of them already have good scores.

“It is good to see practical capabilities are considered as important as academics, but at the same time my friends and I now get to think that the academic specs could be the last factor to judge applicants who might be equally capable,” Kim says. “So, realistically, many students tend to prepare academic specs almost under compulsion as the most basic factor.”

College students remain at school and postpone their graduation, with a goal of competing against fellow students who have similar career visions and gain better job security at conglomerates or government agencies. And the vicious cycle of obtaining top academic credentials continues.

Thanks to the Park Geun-hye administration’s effort to achieve 70 percent employment for people aged between 15 and 64, the employment rate in this age group is 64.4 percent, according to Statistics Korea’s employment report released Wednesday.

However, the youth employment rate has dropped to 39.7 percent. It’s the first time for it to be below 40 percent since 1982. The figure refers to youngsters between the ages of 15 and 29, including high school students and college graduates, and those expecting to graduate.

“Unlike other countries, the Korean job market does not have a ladder that allows mobility in the type of employment, between regular employees and contract employees. It is the same between large conglomerates and small and midsize companies,” says Lee Jun-hyup, a researcher at Hyundai Research Institute. “That is why young people choose to build more specs and remain in school. In a bid to boost youth employment, the government needs to encourage employers and employees make the social consensus in enabling the mobility.”