A life dedicated to traditional art

A life dedicated to traditional art 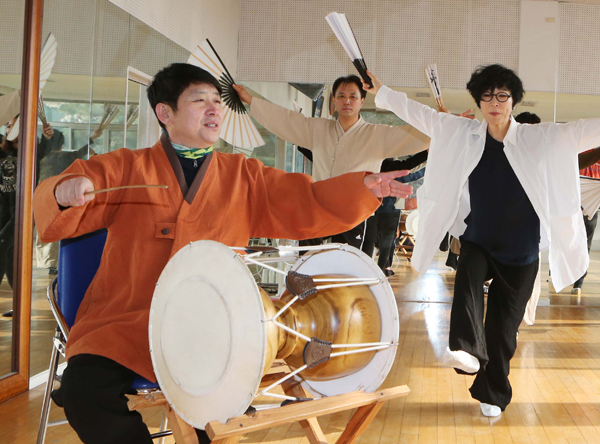 Kim Joon-ho grew up in a broken home. When he was a child, his father abandoned the family, leaving him to take on all kinds of different jobs to support his loved ones.

Kim managed to make it to college and attended Pusan National University for a few years, but he ultimately failed to graduate. Feeling desperate and sick of hardship, he became a sort of homeless drifter, spending his time roaming around Busan Station and Seoul’s Yongsan Station.

By 1988, Kim was doing chores and odd jobs for an arts troupe in Busan while learning traditional Korean singing from people living in the countryside. Those in the community gossiped about him and wondered about this young man, who they wrote off as an eccentric with a curious lifestyle.

But Kim’s life changed the day he was approached by Shon Sim-sim, a student majoring in Korean dance. She had heard the rumors about him and had come to invite him to join the performance group to which she belonged.

Kim accepted the offer on the conditions that the money he owed at a streetcart bar be paid back and that he be provided a regular meal.

The two began performing together in the group and over time grew close. They began dating and ended up marrying in 1995. It was at that point that Kim and Shon decided to focus strictly on folk music and dance, foregoing starting a family.

Over the years, the two became well known for their lectures on Korean traditional music, and in 1995 a broadcasting firm contacted them to appear on the air. They first went live on Busan KBS that same year, and shot to stardom shortly thereafter following their appearances on programs on MBC.

The popularity of Kim peaked during the late 1990s. Viewers enjoyed his singing and lectures on television, and his easy explanations of traditional music helped him gain a substantial following.

Kim, now 51 years old, and Shon currently do a weekly radio program at the Gugak Broadcasting Foundation. They also decided in August to spend time each Sunday at the Busan Folklore Conservative Association, where they teach traditional songs and dances to those seeking careers in the arts. For the past 10 years, the husband-and-wife team has also given free lectures to university students nationwide, asking only that their travel costs be reimbursed.

In honor of his success in the field of traditional music, Kim was named on Tuesday as a holder of an important intangible cultural heritage, designated by the Busan government, for dongnae jisinbalgi, a traditional ritual that is believed to soothe the god of the earth and deter evil spirits from rising.

It was huge news for the couple, and an honor rarely afforded to non-professionals in traditional arts circles.

“I’m happy that my easy explanations and interpretations of complex traditional music have been recognized,” Kim acknowledged. “Some still don’t see the value of our traditional music even though Arirang [the Korean folk song] was inscribed on Unesco’s Representative List of the Intangible Cultural Heritage of Humanity.”

He added, “I won’t stop my lectures until everyone knows the worth of it.”