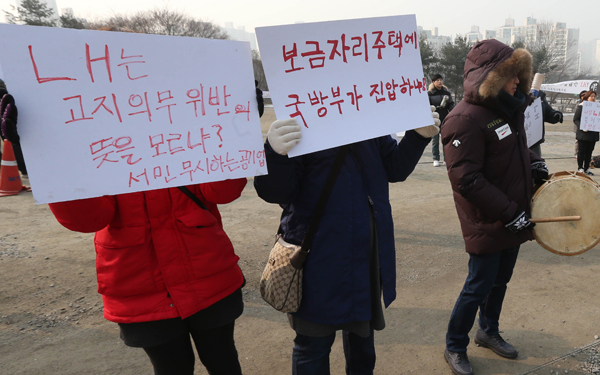 Gunpo residents protest the sale of apartment units to the Ministry of National Defense yesterday in front of the headquarters of the state-run Land and Housing Corporation in Seongnam city, Gyeonggi. By Ahn Seong-sik

About 100 protesters chanting “LH should regret!” raised their pickets in front of the headquarters of the state-run Land and Housing Corporation (LH) yesterday in Seongnam City, Gyeonggi. The pickets read, “Do you think the bogeumjari housing [low-cost, state-sponsored apartments] is for a military base?” and “Why on earth should an office of the Defense Ministry be located in the housing area?”

The residents live in LH-sponsored residential apartments in Gunpo City, Gyeonggi. The protest was against the state-run corporation’s contract to sell 91 apartment buildings to the Ministry of National Defense so the ministry can sell the individual apartments at a discount to senior or retired military officials who dedicated their lives to national defense.

The residents claim the existence of their military neighbors would cause housing prices to fall in the entire complex.

“LH made the contract without giving us prior notice,” said Park Min-yeong, who led the protest. “Military officials usually move frequently, and their moves could cause instability of living conditions in this region and make housing prices fall as a result.

“If they can’t scrap the contract, we demand that the government compensate us for a potential drop in housing prices, through building a new fitness center and upgrading the exterior design of the apartments,” Park said.

LH said the contract is legal and it has no duty to pay compensation.

“The contract with the Ministry of National Defense was carried out under legal procedures,” an LH official said. “There is no legal obligation for us to give the residents prior notice. It’s taken us a year to sell the apartments to military officials; about 500 units are still unsold.”

The military expressed displeasure at the protest.

“I always have pride that I dedicated my life to safeguarding the national security, but now the society seems to see us as criminal or hate us,” an Army general said.

This is not the first protest in Korea involving a military-only apartment complex. In 2011, when the military decided to designate some apartment buildings for senior soldiers in Seocho-dong, southern Seoul, protests from local residents in the wealthy area eventually led the military to scrap the plan. At the time, the protestors said they wanted a cultural center, rather than a military-only apartment in the region.

“Although they did not say it ostensibly, they appeared to say, ‘How dare a military apartment complex be located in the affluent area of Gangnam?’?” a Defense Ministry official said.

“This phenomenon is a unique example of Nimby [not in my backyard],” said Kim Mun-jo, a sociology professor at Korea University. “In general, Nimby refers to the opposition to a disliked group, but actually, families of military officials are not generally hated by the public.”

“In Korea, people think neighbors should be united in launching local infrastructure or making efforts to raise housing prices, but they appear to think that families of military officials are not helpful.”