Clockwise from left: The play “Hwando Yeolcha”; the Korean National Ballet’s “The Nutcracker”; and the film “Christmas in August,” starring actor Han Suk-kyu and actress Shim Eun-ha, will be turned into a play in August. [JoongAng Ilbo]

Nine productions of performances that were planned and produced by the state-run Seoul Arts Center, the country’s largest venue for arts and culture, are being branded under the name SAC Cube 2014. The branding is meant to help the center strengthen its “original productions,” which it plans and produces from scratch.

The center has been criticized in recent years for failing to live up to its initial purpose, which is to “develop and promote culture and arts.”

Representative Choi Jae-cheon of the main opposition Democratic Party, who belongs to the Education, Culture, Sports and Tourism Committee of the National Assembly, said during the National Assembly’s inspection in October that “among Seoul Arts Center’s total budget of 71 billion won [$66.8 million] in 2012, only 3.35 billion won, accounting for 5 percent, was used on performance production cost.” Compared to 2007, when about 15 percent of the total budget of 32.7 billion won was used to create and produce new productions, Choi said that last year’s figure is a big drop.

Center officials explained that although half of the productions are joint works with other companies, the arts center “has been leading the making of this production from the start,” adding that a lot of effort is also required to produce collaborative productions.

“It’s true that there were no original productions staged in the SAC’s Opera House until 2013,” an SAC official said. “This year is a starting year, and we wanted to focus on strengthening the brand image of original productions. Gradually, we plan to increase the number, diversify the genres and raise the quality as well.” 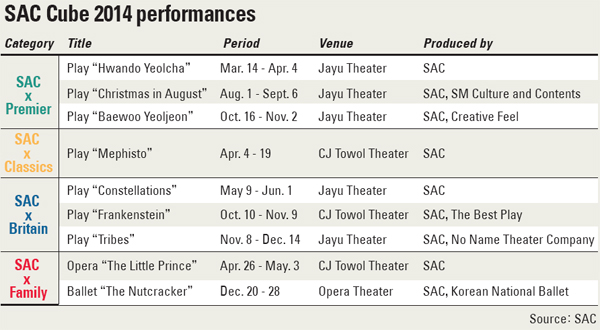 A creative play currently in the SAC x Premiere category, “Hwando Yeolcha,” which translates to “returning train” in English, will kick off the SAC Cube 2014 project in March. A play, “Christmas in August,” which is based on the 1998 hit film of the same name, will premiere in August. The final play that’s included in the SAC x Premier is “Baewoo Yeoljeon,” which translates to “the actor’s heated contest.” Seoul Arts Center said it’ll be the first time for it to try out a play that requires audience participation. Audiences will take part in creating the play - from organizing the story line, casting actors and actresses to directing and promoting the produced work.

In the SAC x Classics category, the play “Mephisto,” which is based on Goethe’s “Faust,” will be staged in April. For the SAC x Britain category, three plays, “Constellations,” “Frankenstein” and “Tribes,” which have been taking center stage in Europe, will be staged by the Korean team. For the SAC x Family category, the famous story “The Little Prince” will be staged as an opera performance for children and parents to enjoy in May, the month of family gatherings. Finally, there’s “The Nutcracker,” performed by the Korean National Ballet, which has appeared at the Opera Theater since 2010. It will end the project in December.

However, despite these efforts, it seems like SAC Cube 2014 is far from meeting its objective to “strengthen original productions planned and produced by the Seoul Arts Center from scratch.” Among the nine productions, only the plays “Hwando Yeolcha,” “Mephisto” and “Constellations” and an opera, “The Little Prince,” are produced solely by the arts center. The rest are joint productions with companies that don’t need support from a state-run arts center.

Moreover, only one of the nine productions will be staged at the Opera Theater, the center’s largest venue, which seats 2,200 people: the Korean National Ballet’s “The Nutcracker.” Compared to last year, the number of original productions dropped from six to four. “The number dropped because last year we were celebrating the 25th anniversary of the Seoul Arts Center,” a center official said. “This year, our focus is to brand the original productions together, rather than increasing the number.”