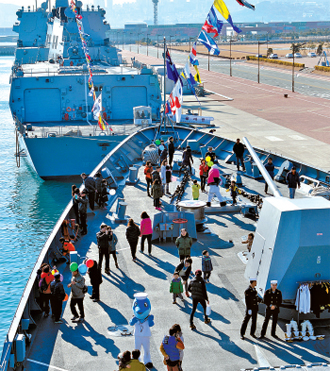 The Naval Operations Command hosted a naval ships open house at the Busan Naval Operations Base from 10 a.m. to 4 p.m. last Sunday to celebrate the third anniversary of the success of Operation Dawn of Gulf of Aden. [NEWS1]

Last Thursday, Korea dispatched its 15th rotation of troops to the Gulf of Aden as part of global efforts to combat piracy off the coast of Somalia.

Since early 2009, the Busan-based Cheonghae Naval Unit has been deployed in the Gulf of Aden and has protected 9,230 passing ships, including 3,950 foreign vessels, from pirates.

The most dramatic moment of the Cheonghae Naval Unit’s mission occurred three years ago today, when Korea’s valiant naval officers rescued a Korean tanker hijacked for six days by Somalian pirates. The entire crew was saved in what was dubbed Operation Dawn of Gulf of Aden.

On Jan. 15, 2011, the Norwegian owned, Korean-operated Samho Jewelry was hijacked by Somali pirates. A day later, the 4,500-ton Navy destroyer Choi Young - part of the Cheonghae Naval Unit in the Gulf of Aden - was dispatched to the area. Navy SEALs exchanged fire with the armed pirates on the Samho Jewelry. Commandos raided the ship at dawn Jan. 21 and rescued all 21 crew members, including two Indonesians and 11 Burmese.

During the raid, the captain of the ship, Seok Hae-gyun, sustained a gunshot wound to the stomach from a pirate gun, and three members of the Navy’s special forces were also wounded in the raid. All recovered.

The five pirates were flown to Busan for trials, convicted of charges of maritime robbery and attempted murder and are serving sentences of 12 years to life in prison at the Daejeon correctional facility.

The JoongAng Ilbo conducted email interviews with the pirates, who have spent the past four years in Korean prison.

“I used to be a soldier in charge of guarding a jail in Somalia,” said Abdikhadar Amanali, 24, who was sentenced to 13 years in prison. “In Somalia, inmates are forbidden to wash, get a haircut or even cut their fingernails and toenails. Compared to that, Korean prisons have very good facilities and treatment for their inmates.”

The Somalian inmates spend their days working from 8 a.m. to 6 p.m. Some start their days with prayers at 4:30 a.m.

“We have to pray five times in the Islamic faith and when we work, we are given time to halt briefly to pray,” said Mahomed Araye, 26, who was sentenced to life on several charges, including shooting Captain Seok.

The convicts spent the first year and a half learning the local language and can understand basic Korean. They spend time watching Korean television. Araye enjoys Korean historical dramas, such as “Empress Qi” on MBC. Others enjoy K-pop and other variety programs.

“Korean food is very delicious,” said Araye. “My favorite menu is fried fish and seafood such as marinated fish and squid. But when I eat meals, sometimes I think of our starving children in Somalia and my heart hurts and tears flow.”

Asked why he became a pirate, Amanali replied, “I was a career soldier in Somalia, but I only received around 50,000 won per month. On a soldier’s wages, we couldn’t clothe and feed ourselves and there wasn’t much we could do in terms of jobs. It hurt me to starve my children. I ended up boarding a pirate ship lured by the promise of a lot of money. Samho Jewelry was my first pirate activity.”

“I was initially a fisherman in Somalia,” replied Araye, “and I worked all day long but earned too little and could barely eat. My first wife left me because I did not earn enough money. The situation didn’t get better and it seemed like my current wife was going to leave me too, because I couldn’t feed the kids. Then one day, a pirate company found me and told me I could earn a lot of money as a pirate. So I began my life as a pirate.”

The hardest part about living here, Araye said, was “missing my family so much.”

After being brought to Korea, Araye said, “I was granted permission to telephone my wife and older brother. But after February 2012, I haven’t been able to reach my wife.”

If he is released, Araye said he would like to remain in Korea.

“Korea considers human life to be precious,” he said. “I am afraid I will get killed if I go back because the Somalia government is unstable. But even if I am allowed to stay, I would worry about my family in Somalia, especially my children.”

The others also expressed their desires to remain in Korea upon their release.

“If I can remain in Korea, the work I’m learning right now, making shoes, is good,” Amanali said. “I think I can do any sort of work.”

The pirates said they wanted to “send thanks” to many Koreans, such as the strangers who made donations that helped them buy sneakers. They are also thankful to the Navy officers who escorted them to Korea and the guards at the Daejeon correction center “for treating us courteously.”

“We hope the Korean people can understand that at that time there were no Koreans killed and we were not professional pirates but merely hired for money,” said the group in a joint statement to the JoongAng Ilbo. “We apologize to the Korean people once again.”

According to the Ministry of Justice, the former pirates have gained around 10 kilograms each since they first entered the correction center.

“They have good relationships with the Koreans at the facility,” said an official at the Daejeon correctional center.

For the third anniversary of Operation Dawn of Gulf of Aden, the JoongAng Ilbo also interviewed Navy Chief of Staff Admiral Hwang Ki-chul.

Hwang, previously the Naval Academy superintendent, was named chief of naval operations in September. He led the mission in the Gulf of Aden from Busan in January 2011.

“More than anything, it was an opportunity to lift the morale of the Navy following the 2010 Cheonan shelling,” he recalls of the mission.

Next year, the Navy celebrates its 70th anniversary, and its first rescue mission in history was a success, Hwang said.

“We went from being a nation that received aid from countries all over the world to being able to protect ourselves as well as protecting other nations’ vessels,” Hwang said. “We were able to prove that our nation’s status has risen that much more and that our Navy’s overseas operational abilities have improved drastically.”

In 2008, as pirates became a scourge in Somalian waters, various nations deployed their navies and some merchant ships hired armed guards from private companies. They charged $100,000 per ship for their protection services.