Mobile costs go through the roof

Mobile costs go through the roof 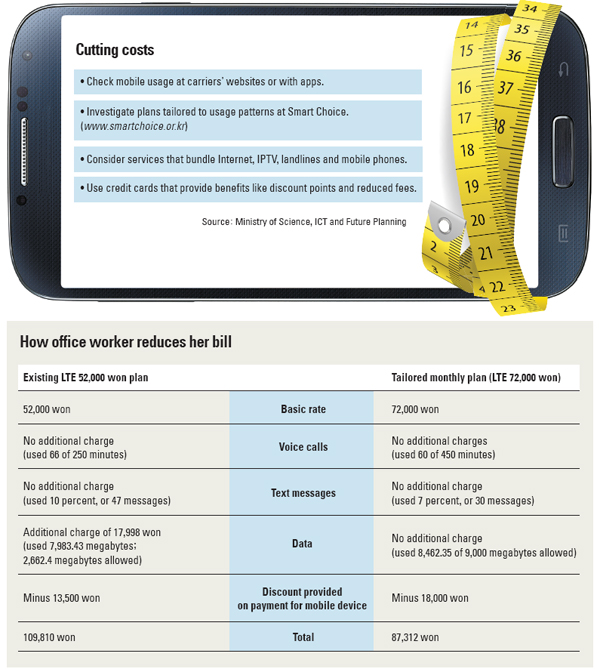 As prices of handsets grow and replacement periods shorten, the average communications cost per household has reached 157,600 won ($148) per month.

The figure as of Jan. 15 represents the average monthly communications cost for two-person households, according to Statistics Korea. It is 20 percent higher than in 2008 and the third highest among 34 Organization for Economic Cooperation and Development member countries, after the United States and Japan.

In addition, Koreans get new phones every 16 months on average, the shortest replacement period in the world by eight months, according to Strategy Analytics.

Along with more expensive mobile devices, the cost of broadband LTE and LTE-A has boosted bills.

A 26-year-old office worker surnamed Kim has paid 120,000 won a month since she purchased an iPhone 5 in 2012. Although she subscribes to a mobile carrier’s LTE 52,000 won monthly plan, which provides 250 minutes of phone calls, 2,662 megabits of LTE data and 5,000 won worth of text messages, Kim’s monthly phone bill ends up being more than double the base price of the plan.

“Most of my mobile phone usage involves data, not phone calls or text messages, and every month I end up with huge additional fees for data use,” says Kim. “When I signed up for the mobile phone and the monthly plan a year ago, all the plans seemed to include text messages and phone calls, which I don’t use much.”

Like Kim, most smartphone users don’t know they can cut their costs by switching to a plan that is closer to their usage.

“Just because the 52,000 won plan seems cheaper than the 72,000 won plan, it did not mean that I ended up with cheaper bills,” she says. “The number and structure of monthly plans are so complex that I just trusted the recommendations of mobile carriers.”

However, there is help: the Smart Choice website operated by the Ministry of Science, ICT and Future Planning. By visiting Smart Choice and entering their voice-call minutes spent, number of text messages sent and amount of LTE, 3G or 4G data used, consumers can get recommendations for the most suitable and cost-effective plans.

In addition, households can reduce communications costs by using bundled plans that offer a landline phone service, Internet and IPTV in a single package at a discounted price.

Large families can also take advantage of incentive rewards. SK Telecom, for example, provides discounts based on the total number of years family members have been subscribers.

Considering that foreign workers and multicultural families often phone abroad, LG U+ has introduced a monthly plan that provides both international and domestic calls.

For instance, if a user subscribing to an LTE 72,000 won monthly plan gets International Free 10,000 won, he or she receives 500 minutes of domestic and international calls and pays 10,000 won more per month.

The industry expects that as the number of foreigners in Korea steadily increases, more services that cater to them will appear.