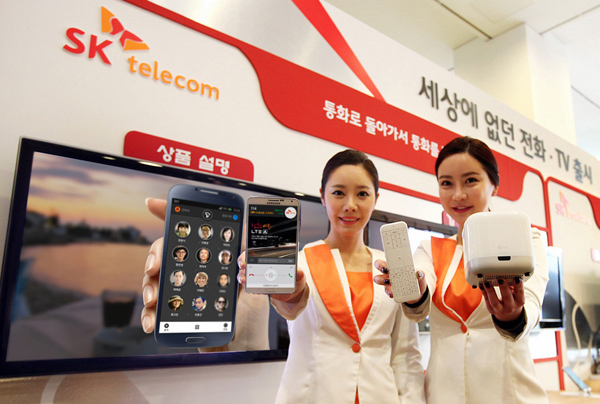 The nation’s largest mobile carrier, SK Telecom, unveils new communication platforms for smartphones and IPTVs during a press conference yesterday at its headquarters in Jung District, central Seoul. Provided by the company

The T Phone is a new platform equipped with various communication features that combine voice calls and data services.

It is designed to let users find the phone numbers of businesses and organizations through the 1 million phone numbers stored in the T Phone database, without calling 1-1-4.

“When users receive calls from unknown numbers, the T Phone informs them who called and for what purpose through SKT’s phone number database and customer review,” said an SKT spokesman.

And the call key shows the people users have talked to most often, allowing them to take notes on conversations or appointments immediately after the call.

The T Phone service will be available on smartphones to be released by SK Telecom and major manufacturers in February.

SKT customers will be able to choose between T Phone and the manufacturers’ own platforms.

“We will actively engage in developing personalized and catered products and services that meet customer needs through more detailed and sophisticated data analysis,” said Park In-sik, president of SK Telecom.

“Like T Phone, the world’s first communication platform, we aim to find the hidden desires of customers to provide more satisfaction through product competition and to strengthen market leadership.”

B Box systems also provide an interface tailored to media use patterns. It turns on the user’s favorite TV channels and provides information on weather, traffic conditions, stock prices, exchange rate information and news on its home screen.

For real-time TV, a user can watch up to 12 channels at once through the B Box Dynamic Channel feature.

B Box introduces an SNS Family Board, where family members can share photos, videos, schedules and complimentary medals through their TVs and smartphones.

B Box owners can use HD video calls with other B Box users, and the B Box Drive shares music and video files in computers to TVs.

Its home-monitoring function is expected to increase security levels.

“Intensifying competition in areas of future growth and changes in customers’ consumption patterns are expected in 2014 as LTE matures,” said Park.

SK Telecom said it will use third-party services to continue expanding and developing the new platforms by opening up to outside businesses and embracing creative services. The company also said it wants to pursue evolution through open cooperation.