A career at CheilJedang leads to more opportunities

A career at CheilJedang leads to more opportunities 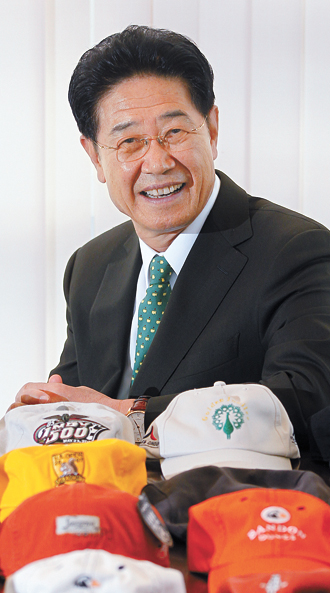 Kim Un-yong, who recently began a new chapter of his life in China, stands behind the baseball caps he’s collected from prestigious sports clubs. [JoongAng Ilbo]

Kim Un-yong, 67, is known as a sort of legend among his former colleagues. For 48 years he was continuously employed, starting out at CheilJedang in 1966 as a young man. Kim only retired just last year, finishing up his service working as the president of Nine Bridge Golf Course.

But that wasn’t the end for him.

Kim was headhunted by China’s Dalian Wanda Group to work as a management consultant and the president of a 54-hole golf course resort, near Mount Baekdu, which has 43 ski slopes and 3,300 rooms.

Now, his annual salary exceeds 500 million won ($462,717). He signed a contract for two years, after which he will have completed an even 50 years of employment.

But Kim’s life wasn’t always so glamorous. He spent 19 years as an executive, working his way up to the top. However, life has been fruitful for the 67-year-old, a fact he attributes to hard work, trust and dedication.

Kim joined CheilJedang’s volleyball team after graduating from Jinju Mechanical Technology High School. He quit after three years due to knee problems and began work as a junior staff member in the general affairs bureau at CheilJedang.

In 1978, when Samsung established a basketball team, Kim was scouted to manage the team.

In 1980, Kim took over as the plant manager at Yongin Natural Farm, currently known as Yongin Everland.

At the time, this position was nicknamed the “Aoji Coal Mine” - a reference to the site in North Hamgyeong Province, North Korea - a moniker it received because of its distance from Seoul and the fact that many employees ended up quitting over professional differences with Lee Byung-chul, the late founder of Samsung Group.

As a result of the high turnover, the job offer came to him. Even though Kim knew little about plants or trees, he took a risk and decided to take it.

The move turned out to be a wise one, and Kim was eventually recognized for his integrity and hard work.

“I tried to be truthful to others and learned the value of trust and honesty,” he said. “Traversing working life can be like walking through a minefield. But thanks to the values I learned, I got along without incident.”

Kim was eventually promoted as CheilJedang’s director in 1995, and during his five years in that position, he was awarded the grand prize for sales after opening a new shopping mall and promoting the Haetban brand of instant rice to be used in the bibimbap dish on in-flight menus.

But despite his successful career, Kim remained ambitious, obtaining bachelor’s and master’s degrees and even an honorary doctorate in his 50s.

“When I was a volleyball player, I learned the lesson that there is always a reward for effort,” he said. “To last long in a career and do it well, creativity, innovative ideas and passion are necessary.”