Siemens tries to meld the best of Korea and Germany

Siemens tries to meld the best of Korea and Germany 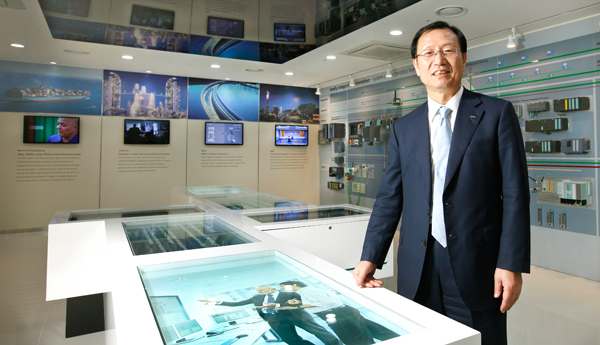 Under the 167-year-old German company’s catchphrase “Best of Both,” Kim has been working hard for nearly three years to bring Korea’s strengths together with those of Germany.

“Korea is the world’s first in speed, while it is a little less in terms of completeness,” Kim said in an interview with the Korea JoongAng Daily. “On the other hand, Germany pursues perfection, but it is a bit slow. Is it possible to bring the two together?”

The government official turned CEO defines the Park Geun-hye government’s ambition to build a creative economy as a regulation-free stage for businesses.

“The government is supposed to make a stage for companies,” Kim said. “I like the idea very much, and it will help make the country more transparent with fewer barriers along with deregulations of the sort that come with free trade agreements.”

With a conservative view of this year’s economic conditions, Siemens will continue tightening its belt, but it plans on increasing investment and employment in Korea.

Siemens opened its energy solution headquarters in Seoul last year, which will be a global home to energy-related businesses taking place all over the world by bringing in around 100 German engineers. The headquarters will be handling more than half of the company’s international energy businesses. All decision making and purchasing processes regarding global energy deals occurring as far as the Middle East will take place in the fourth-largest economy in Asia. About 230 foreign and Korean employees are working at the new headquarters based in Seoul, including the 100 German engineers.

Kim plans to expand the work force to 500.

“The energy solution headquarters will be the foreign business entity with the biggest number of foreign employees in the country,” Kim said.

Born in 1951, Kim served at the Ministry of Commerce, Industry and Energy until September 2004 and then worked as the 18th commissioner of the Korean Intellectual Property Office through 2006. He was the CEO of Hynix Semiconductor from 2007 through 2010 and became chairman of the chip maker in 2011. 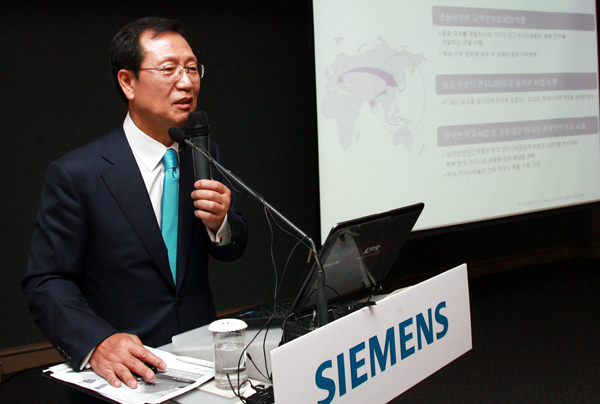 Kim Jong-kap talks about establishing the energy solution headquarters at a press conference in May 2013. Provided by the company

Q. What kind of differences have you found between German and Korean government and business sectors?

A. Some might think public interests differ widely from private interests, but I disagree. We live in the same society. We can’t really draw a line between values and interests of the government and private businesses. We have to consider our employees, contractors and the community all together. This is the European way of considering things. The European way is different from the U.S. shareholder capitalism model that pursues short-term profits. So, being at a German company for three years, I have learned that businesses have similar interests with the government. In terms of co-prosperity, we want to be together for a long time with partners and the community. We need to make a team consisting of our customers, partners and society no matter what we do and wherever we are. German companies entered the Korean market when the country was hit by the Asian financial crisis. They invested in the country, probably believing that Korea would never collapse. They didn’t just think about numbers or returns on investment. They believed in our nationality.

How far have you come in terms of localizing Siemens in the Korean market?

Although we have achieved some goals, there is a long way to go in terms of increasing our capabilities. It is true, every Siemens branch can’t do as much as the headquarters, but we still need to make efforts to reach our best capabilities. It is crucial to equip ourselves with the appropriate capabilities for the Korean market.

Compared to the past, I think I have contributed to elevating Korea’s status within the Siemens Group. Before, Korea was not recognized as much as China. But having the energy solution headquarters here boosts the significance of the Korean market. More than half of international work of the energy solution business will take place in Seoul. All decisions will be made here and purchases of raw materials and parts will also take place here. Currently, about 120 employees are working at the energy solution headquarters and we plan to increase that figure to 500 as early as possible. The most important task is to educate local engineers to be as capable as German engineers. German engineers are the world’s best. By bringing the headquarters to the country, we are bringing in people at the same time. Siemens is probably the foreign company with the largest number of foreign employees in the country. Currently, there are 100 foreign employees at the headquarters.

Another proof of Korea’s solid position in Siemens is that it became one of the 30 leader countries selected by the headquarters last year. We directly report to a board member in charge of the Korea business. Before, we were required to go through the Asia-Pacific regional headquarters.

Our catchphrase is “Best of Both,” which means converging Korea’s strengths with Germany’s strengths. Korea is strong in speed, but it is not perfect in terms of completeness. On the other hand, Germany pursues perfection, but its system is considered slow. Will it be possible to merge speed with perfection? Siemens Korea can be a successful model of converging the best capabilities of the two countries.

Left: Kim holds hands with children at Eco Camp, an educational camp that is part of the company’s corporate social responsibility program in 2012. Right: Kim donates briquettes to low-income households to help them keep warm during the winter last February. Provided by the company

How did Korea land the energy solution headquarters?

There was fierce competition among five overseas branches of Siemens. Korea survived heated competition with the runner-up candidate until the last minute. Frankly, the Korean market is less competitive in terms of size. So, we should go beyond the borders to reach neighboring markets. For companies that are operating in every corner of the world like Siemens, FTAs are very useful when we do business in small markets like Korea. FTA deals make Korea look bigger, more transparent and with fewer barriers. If the Trans-Pacific Partnership is completed, it will be much easier for Korea to attract more headquarters of global companies. Since the government has been working hard, we are seeing good progress in foreign investment. I heard there are eight headquarters of international businesses in Korea. But hurdles that affect not only foreign but also local businesses remain. In the future, when these headquarters start making profits, corporate income tax rules can be an issue. Foreign businesses also complain there are frequent changes in business regulations that they are unaware of.

What are the growth goals and strategies of Siemens this year?

For the past two years, Siemens had conservative forecasts of the global economy and tightened its belt as much as it could to improve productivity and cut costs. Last year, Siemens Korea posted 2.3 trillion won ($2.1 billion) in sales. We will continue the efforts this year. Since the German company is quite conservative, our economic forecasts are not that rosy.

But fortunately for Siemens Korea, there are plenty of opportunities especially in the energy market this year and afterward. For the next five years, we can expect double-digit growth in investment and employment for the Korean market. We have already won significant amounts of orders for gas plants and wind turbines. As the U.S. has discovered shale gas, the gas business is forecast to be very promising not only in Korea but everywhere.

With never-ending conflicts in political circles, some people say Korea should learn from Germany. What is your opinion?

It is desirable to learn a lesson about the way Germans reach social consensus and form national sentiment. They are good at resolving social conflicts as seen in the success of the launch of the coalition-led government. I hope our politicians make such efforts, too.

But I can’t say the German system is ideal. In the business world, German companies pursue internal growth unlike U.S. businesses, which seek external growth through aggressive mergers and acquisitions.

How do you view the creative economy goal of the Park government?

To me, the main idea is to make the country more creative. The government will make a stage for companies and companies will play the game. This leads to the deregulation issue. One of regulations needed to be eased is the restriction on businesses entering the Seoul metropolitan areas. The government’s intention to improve the quality of life in provincial areas is understandable, but young employees refuse to work in cities as far as Icheon, Gyeonggi. 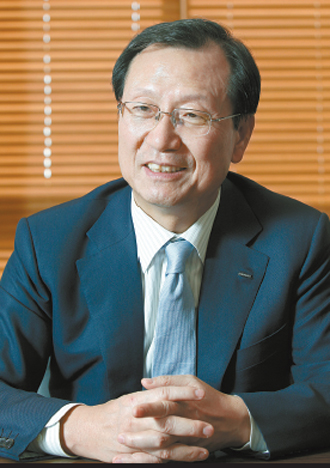