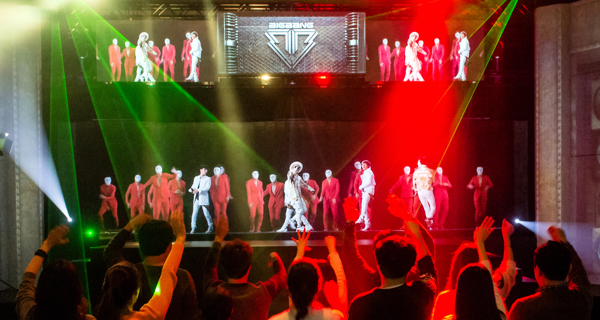 Those who like their K-pop served with a dash of art can now get their culture fix at Dongdaemun’s newest shopping center Lotte Fitin.

YG Entertainment, KT and the technology-design company called d’strict have joined forces to develop a 1,652-square-meter (17,782-square-foot) hologram concert venue on the ninth floor of the mall, along with an art space called Klive Gallery.

The quaint exhibition room upstairs will give local up-and-coming artists a chance to promote their works to a global audience, as K-pop fans from far and wide come to watch the hologram shows.

“We’ve been interested in the entertainment industry for some time,” said Kim Jong-hyeok, senior manager of KT’s New Business Development team, at the gallery’s opening Friday, just one week after the concert venue opened. 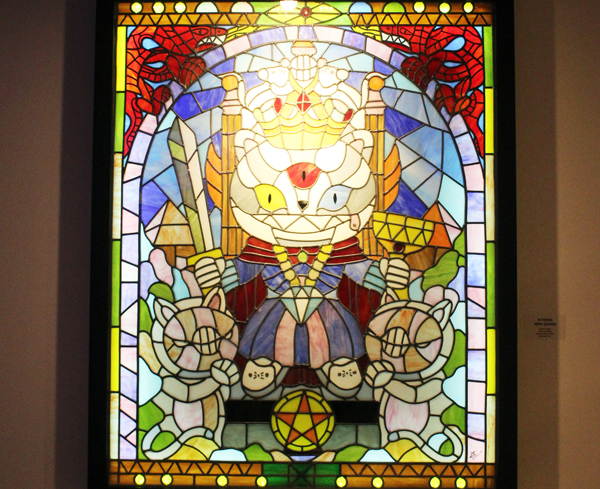 And while the highlight of Klive is no doubt the concert hall, which can accommodate up to 400 screaming K-pop fans at a given time, the gallery will widen the demographic range with its very first exhibition by figurine artist Cool Rain and designer Kun.

For the premiere showcase, “Imagination and Reality,” Cool Rain contributed B-boy dolls to fit the K-pop theme “dancing to the rhythm.”

The dolls go back to 2007 and the artist said that he had to redo a few of them again, by no means a trivial task, as each doll takes three months to make. Each B-boy comes with its own style, some with nose rings, gold chains and even high-tops with shoelaces.

Although every doll is a unique creation, Cool Rain said that he did have one that he paid special attention to.

“I guess being Korean, Hong 10 would have to be my favorite,” said the artist, referring to the break dancer who won last year’s Red Bull BC One championship in Seoul.

If the figurines inject a dose of reality into the entertainment world, then Kun’s stained-glass artworks that run wall to wall inject much color and cryptic philosophy with some cheek.

The series, titled “Messiah,” is the artist’s interpretation of the Korean Wave, which he sees “taking the world by storm,” somewhat akin to a religion.

With his trademark Cool Cat characters, Kun said he tried to depict the all-encompassing nature of Hallyu at the moment.

“After traveling through England and France, I started thinking about the notion of culture,” said Kun.

While not a follower of any religion, the designer said that he looked to Christianity, Hinduism and other world beliefs for inspiration.

The collection starts with a Madonna feline handing her baby a sacred object: an Apple device.

“I asked myself, what object today is the equivalent of what the Bible was in bygone times?” Kun said.

Zigzagging in between hedonism and worship, all the while dropping symbolic clues, the mischievous cat can be seen in a night club, a jjimjilbang (or large Korean bathhouse) and even in what appears to be a spoof of “The Last Supper,” before it comes to a dramatic end with a figure titled “The Black Queen.”

While each glasswork means something to him, Kun said he wanted visitors to decode it in their own way.

The exhibition runs until April 17. Although the exhibit is free to the public until Friday, starting next month the gallery will only be free for those who watch a hologram show.

FNC Entertainment is also in talks with Klive over a possible show of its artists.