Chagall forgery ordered to be burned

Chagall forgery ordered to be burned 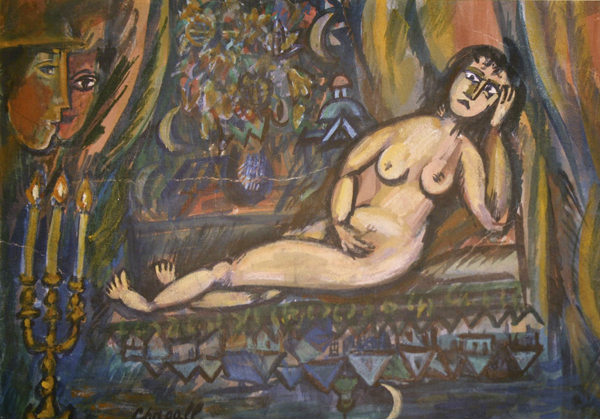 This handout photograph made available by Martin Lang in London on Monday shows a painting owned by him. British collector Lang submitted the painting to a French committee, hoping to find out whether it was an authentic work by Marc Chagall. But not only did the Chagall Committee declare the painting a forgery, it said Lang’s painting should be burned under strict French laws that protect artists’ works. [AP/NEWSIS]

LONDON - When British collector Martin Lang submitted one of his paintings to a French committee, he was hoping to find out if it was an authentic work by Marc Chagall.

But not only did the Chagall Committee declare the painting a forgery, it said Lang’s painting should be burned under strict French laws that protect artists’ works.

Lang, 63, said Monday he was frustrated with the decision but he still hopes the painting will be returned.

Describing his shock at the ruling, Lang said: “It was just total disbelief that they would want to destroy it.”

“I’m not attacking the committee - I just want them to please reconsider. They could just mark it unoriginal and send it back,” he told The Associated Press.

The businessman bought the watercolor of a reclining nude woman for 100,000 pounds in 1992 from a London-based art consultant. The work was not authenticated, but it was believed to be a Chagall dating from around 1909 to 1910.

Lang’s son recently called in experts from a BBC show about forgeries to determine if it was real. According to the BBC, the painting surfaced in Russia after the 1991 fall of the Soviet Union and was offered to Lang at a fraction of its value.

The painting was eventually sent to the Chagall Committee in Paris for a final ruling. The committee - run by the Russian-born artist’s grandchildren to protect his legacy - ruled it was a fake and said it would be destroyed under French law.

Lang said he did not understand why art collectors like him should be punished for forgeries.

“It seems to be dissuading honest people from coming forward to have their art verified. It seems to be the wrong way of doing it,” Lang, a property developer from the northern city of Leeds, told the BBC.

The Chagall Committee declined to discuss the case Monday.

But one expert, Francois Duret-Robert, author of “The Law of the Art Market,” said that the destruction of a counterfeit painting is not only legal in France but expected.

“You could say that a forgery is an infringement on an artist’s work,” Duret-Robert explained, adding that French law is possibly the world’s strictest when it comes to protecting the works of painters and sculptors.

A judge ruling could decide upon other options, however, including clearly erasing the forged signature and marking the work as counterfeit or passing it along to a museum to help detect future forgeries.