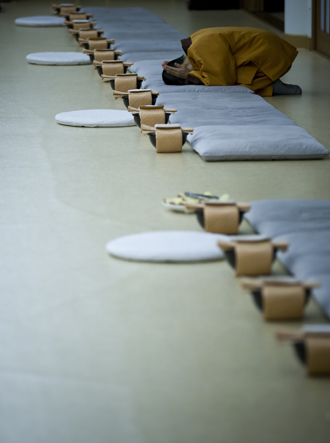 An attendee at Woljeong Temple bows before his meal.

Life is full of uncertainties, they say.

“After graduating from Seoul National University with a degree in economics, I thought the next step was to get a job at a public enterprise,” said 25-year-old Shimjeon, a Buddhist name that means field of heart.

But Shimjeon said she failed one exam after another. She even tried to take the civil service exam, but was met with more failure.

“Funny enough, I’d never even considered why I wanted to work for a public enterprise. I just assumed that I should go after the things that everyone else wanted. I had no idea what I truly wanted.”

To find out what she wanted, Shimjeon came to Woljeong Temple in Pyeongchang County, Gangwon, early last month to participate in a monthlong monastic training program.

“I used to think that my qualifications or profession gave me value,” said Shimjeon. “And without those things in place, I thought I was worthless. I always lived as my parents told me to, but this time, without my family and parents, I wanted to find out what my life was worth and what it was I truly wanted.”

Shimjeon and 48 other participants, ranging from teenagers to the elderly, were given new names. Some of the participants came from top-notch jobs, while others were middle school students, but all came with the same determination: to reflect on their life’s journey and to find themselves.

Cut off from the rest of the world, the trainees were not allowed to use phones, go out, talk to visitors or drink alcohol. The program is a far cry from the popular two- or three-day temple stays as it is an introduction to those who want to become monks. Each day, the trainees rose at 3:30 a.m. and performed 108 prostrations, or bows.

Buddhist services, meals, Zen meditations, cleaning, chanting, hiking and sermons followed. Attendees then had to write in their diaries before going to bed at 9 p.m. Men had to shave their heads and some women followed suit, although that wasn’t required.

Everyone was given one bowl to eat from and nothing had to be left behind. Everyone also had to eat in unison - no one was to finish earlier or later than the group.

There were also set times for washing - both for garments and the body - and it was done communally by hand. If a participant made a mistake, then everyone had to repent together.

“One time, I bowed for three hours straight,” said one participant. “I was exhausted and asked myself why I was doing this. Then the monk said to smile and I saw the person next to me smile and that’s when I realized it’s all in the mind.”

He said that he learned he wasn’t angry because he was tired; it was just conditioned behavior.

Two of the most important words in learning temple rituals are “mookun” meaning muteness, and “hashim,” which means to humble oneself.

Apart from responding to monks and voicing illnesses, those who participate in the program are not allowed to speak.

When the JoongAng Ilbo visited the temple last month, one attendee explained the reason for their silence while on a walk away from the temple’s compound.

“Through silence, you learn how unnecessary speaking is,” said a teacher who is on the verge of being promoted to a vice principal at his school. “We often speak to give advice, but these words can hinder a person from finding the path. Once I’m back in the world, I’m only going to speak when necessary.”

The Venerable Bubchul, who oversees the short-term training program, explained the rationale behind observing silence.

“It’s about doing away with right and wrong in the mind,” said the monk. “Hashim [humbling oneself] is about letting go and getting rid of those things that your mind and body is comfortable with. To put it simply, it’s eliminating jealousy, greed and such emotions.”

The temple’s chief monk, the Venerable Jeongnyum, said that the two practices were necessary to clear the mind. 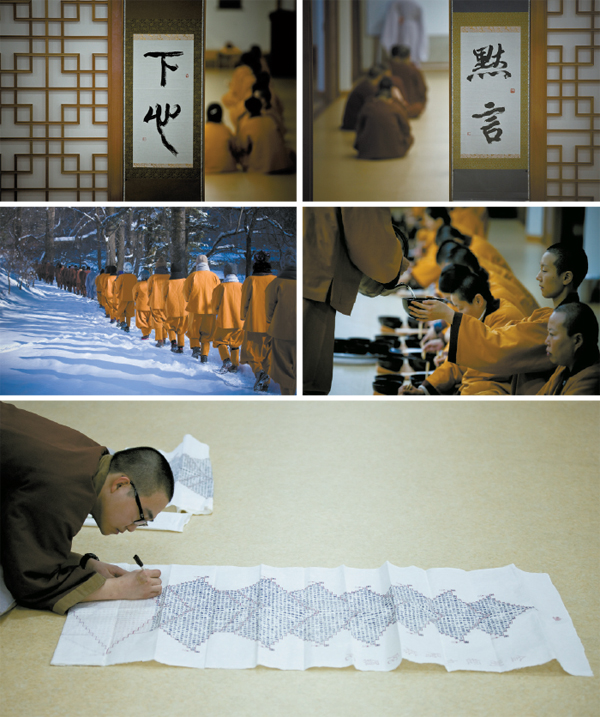 Those undertaking the monthlong monastic training program learn how to bow properly and must adhere to a strict regime in which silence is golden and humility is paramount. By Kwon Hyeok-jae

“Anger, jealousy and greed that people feel on a daily basis can be likened to the night sky. There are countless stars in the night sky. Those emotions are like the stars, and when you become aware when these feelings rise up, it’s important that you just observe,” the monk said. “The purpose of the temple stay is to do away with the fighting and judging, and become the moon that shines on these stars.”

Meanwhile, the hardest part of the physical penance in the program is to do away with habits that the body has become used to over the years.

Seongakin, which means a person with foresight, said that through the strict regime, she has come to realize how grateful she is for the freedom to do daily tasks such as eating in everyday life.

Before coming to the temple, Seongakin was plagued with worry. After getting married at a young age, she followed her husband to Australia, where she lived a comfortable life. But her happiness didn’t last long and she filed for divorce after her children went to college.

After returning to Korea, she opened a clothing shop to provide for her children. But when the Korean economy took a bad turn, she had to close it. Seongakin tried to reconcile with her husband, but the two eventually parted ways again. She came to the temple to find a way to stop worrying about the future.

“One of the things I learned at the lecture is that the wise don’t spend time regretting the past; they are free beings in the present as they do not cling to it, and they are not afraid of the future, which makes them refreshing,” she said.

While other retirees go to Hawaii or Southeast Asia to celebrate, Taego said he thought it was more important to find himself, so he came to the temple.

“It was a weird feeling when I shaved off my hair,” he said, likening the experience to being born again.

“Looking back on my life, I realized I lived an unfruitful life. I was busy at work and had no time to look around me or to spend time with my family. I’m sure my colleagues were hurt because of me,” said Taego, adding that he wanted to change his ways. “I’m going to become a positive person who brings happiness to those around me.”

The short-term monastic program at Woljeong Temple began in 2004, but it has come a long way since then. In its early days, the program was nearly identical to the long-term training for monks, which can take years, but it was modified after more private citizens wanted to get involved.

Although two humble meals a day are compulsory, now, participants are able to go to the cafeteria for a regular dinner. Female cohorts are able to use sunscreen and lotions while in the program. The content of the lectures have also become more contemporary and relatable, and music and art therapy are part of the course.

Upon completion of the program, the participants are familiar with how to bow and walk properly, along with other basic temple etiquette.

If one participant cannot perform these rituals properly, the entire group is reprimanded. Many individuals may find the rituals daunting and drop out.

Bowol, which means walking by moonlight, said she signed up thinking it would be a walk in the park.

“I thought it sounded cool, but when I got here I started thinking, ‘Why did I pay money to be treated like this?’?”she said.

She said if she could offer a word of advice it’d be that, “You don’t come here thinking this is some sort of organic boot camp where you eat good food and listen to good sermons. It’s physically grueling and mentally challenging, too.”

The Venerable Bubchul said that bowing 3,000 times is not just a ritual, and it is significant because it signifies triumphing over inner turmoil 3,000 times.

“Adopting new practices and feeling conflicted as a result is normal. After 10 to 15 days of temple stay, you find that many people reach the end of their ropes. But if you overcome that period, you are triumphing over the self and are able to chase after what you want in life.”