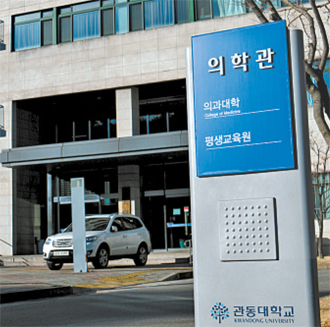 The home of Kwandong University’s Department of Medical Science in Gangneung, Gangwon [NEWSIS]

Unhappy with the quality of Kwandong University’s Department of Medical Science, 120 medical students in the first three years of their studies collectively applied for a leave of absence on Monday.

But the university, based in Gangneung, Gangwon, refused the applications, citing procedural reasons that students should apply individually from Feb. 10 to 14.

A committee formed of protesting students and their parents is planning to hold a rally in Seoul on Sunday and submit their applications individually the next day.

The root of the students’ dissatisfaction lies with the school’s lack of its own teaching hospital, a problem since the department was founded in 1995.

The Korean government in 1995 granted permission to regional universities to open medical departments in a bid to encourage development outside of Seoul and other major cities. At the time, universities were not required to have their own hospitals.

Most of those universities went on to build hospitals. Only two did not, Kwandong University and Seonam University, but they instead created affiliate programs with other hospitals.

Seonam, in North Jeolla, was ordered to close its medical program by the Ministry of Education last year, because of the poor quality of its program. The university filed a suit immediately and the result is pending in a court.

Due to its lack of a hospital or even plans to build one, Kwandong University has been ordered by the Ministry of Education to reduce its class size for the past three years.

However, at a university planning meeting held Jan. 24, the school said it still has no plans to build its own hospital.

“The president of the university has said keeping the medical science department is so costly that the university may consider ending the program,” said a parent who requested anonymity. “They seem unwilling or unable to build an affiliated hospital.”

Kwandong University used to send students to Myongji Hospital in Goyang, southwest of Seoul, but in January changed to Jesaeng Hospital in Seongnam, southeast of the capital.

“The school didn’t have discussions with students or parents about changing the training hospital,” said a student. “I’m worried about the education environment since the new school has no experience teaching in my field and lacks a teaching system.”

An official at the Ministry of Education also said, without changes, it would be “impossible to keep the medical department.”

“We will see whether the newly affiliated hospital [in Seongnam] conducts its medical training properly, which will affect our decision whether to allow the department to continue.”