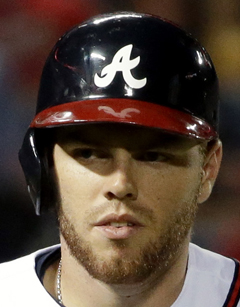 The Atlanta Braves agreed to an eight-year contract with first baseman Freddie Freeman that is worth about $125 million on Tuesday. The deal was confirmed by the team on Tuesday night.

Earlier in the day, outfielder Jason Heyward and the Braves agreed to a $13.3 million, two-year contract. Heyward and Freeman had filed for salary arbitration last month.

The 24-year-old Freeman was an All-Star last year when he hit .319 with 23 homers and 109 RBI. He matched his career high in home runs and set highs in batting average and RBI. He finished fifth in the NL MVP voting and has topped 20 home runs in three straight seasons.

“Freddie has established himself as one of the best young talents in the game,” Braves general manager Frank Wren said. “We are excited to sign one of our own homegrown players to a contract that will keep him in a Braves uniform for the next eight seasons.”

Closer Craig Kimbrel is the Braves’ only player left in arbitration.

Heyward was happy to avoid arbitration.

“In my head it basically says to me, let’s go play some baseball,” he said.

Heyward is coming off an injury-filled season, and Wren said the relative lack of playing time complicated the arbitration process and helped make the two-year contract possible.

Heyward hit .254 with 14 homers and 38 RBI in a career-low 104 games during his fourth season with the Braves. He had an appendectomy on April 22 and broke his jaw on Aug. 21 when he was hit by a pitch from New York Mets left-hander Jon Niese.

“Last year was such a tough year physically, through no fault of his own, with the appendectomy and getting hit in the face,” Wren said. “So it also made it tough for both sides in an arbitration situation because it’s hard to pin down a number when you’re comparing him to players who played a lot more.”

Heyward’s deal calls for a $1 million signing bonus, payable in equal installments on May 1 and July 1, and salaries of $4.5 million this year and $7.8 million in 2015.