As the importance of environmentally friendly businesses continues to rise due to global warming and the green revolution, Korea’s midsize group Dongsung is aiming to take over a niche market with affiliate Dongsung Ecore, using waste tires as a resource.

Dongsung Ecore recently clinched a 30 billion won ($27.8 million) deal in China to set up a waste tire pyrolysis facility and use it for technology support. It will also receive royalties from the Chinese company based on sales.

In addition, the company is also set to ink a deal in Australia and establish a plant in the United States.

Dongsung Holdings President and CEO Park Choong-yeul says it’s a matter of luck that Dongsung Ecore is rising. Park was previously the Dongsung Encore CEO before being promoted to manage Dongsung Group this year. 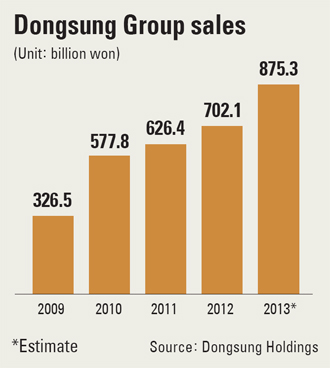 “About 1.6 billion tires are cast off worldwide every year, and these waste tires were burned for fuel, but environment pollution is the problem these days,” Park said in an interview with the Korea JoongAng Daily yesterday. “Many countries are now tightening their environmental regulations, and this is an area with big possibilities.”

Dongsung Ecore focuses on the tire-to-energy (TTE) business, producing pyrolysis oil, pyrocarbon and steel scraps from waste tires through pyrolysis technology. Pyrolysis is the chemical decomposition of a high molecular substance by indirect heating at temperatures between 400 and 600 Celsius in low oxygen conditions. It is considered an environmentally friendly process that does not involve combustion or other polluting processes.

Existing TTE business operators mainly use batch-type systems for pyrolysis, which are considered less efficient and can operate only two or three times a day, and require pre-heating time.

Dongsung Encore uses a continuous type of pyrolysis with a refined technology. Unlike the batch type, it is possible to operate 24 hours a day by feeding waste tires into reactors continuously. Furthermore, its disk chain removes coke in a reactor tube, allowing for easy maintenance. The company said it has 12 patents on its pyrolysis technology.

“We are confident about our technology,” said Park. “Other companies can also enter the TTE business, but the question is whether they can continuously make products that meet the needs of the market.”

Park said the backbone of the TTE system rests on Dongsung Group’s 55 years of experience and knowledge in the chemical industry. Dongsung Group started as Dongsung Chemical, which specialized in polyurethane products. The company was known for providing rubber and other material used in the sole of Nike shoes.

“Basically, the TTE business is the inverse of our main business, which is to develop new materials with chemical compounds,” Park said. “The competitiveness of the TTE business is not only about refining technology, but having good chemical technology to polish the product, whether you are using car tires or truck tires.”

Park said his goal is to make the business a franchise, meaning the company will mainly focus on selling technology and getting royalties instead of running plants.

“Before other companies will chase us in the future, we need to let other TTE operators apply our technology,” Park said. “We think there should be at least 400 to 500 TTE plants in the world, but it would be difficult for us to build and run all those plants.”

According to Park, what the company will be doing is similar to consulting rather than manufacturing.

As a skipper of a midsize group with 11 affiliates, Park is eager to find his next growth engine.

The group in recent years has been expanding with M&As. The most successful was in 2009 with the acquisition of Finetec, which specializes in manufacturing LNG or LPG insulation panels.

The company now accounts for nearly half of the group’s total sales.

Park said for this year, the group is looking for sales of 1 trillion won and wants to triple its earnings by 2020.