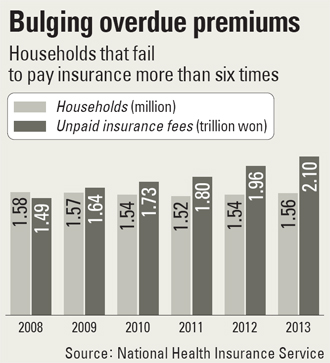 The Ministry of Health and Welfare said it will toughen penalties against those who habitually delay paying their health insurance fees, and those who fail to pay more than six times will be barred from receiving state-funded coverage.

The new shift means that policy violators will be left to spend far more on doctor visits or prescription drugs.

In the past, those who neglected to pay their fees were still able to receive coverage under the national health insurance policy even if they continually failed to pay.

According to the Health Ministry, the percentage of those insured who fail to pay but eventually return their premiums stands at 3.8 percent. But because requests for payment are not legally binding, many insured neglect to make their payments altogether.

The regulation, scheduled to go into effect in July, is intended to curb the increasing number of people who fail to pay their premiums on time, a total of 1.7 million.

The cost of coverage used to support insurance offenders amounted to 3.1 trillion won ($2.88 billion), or about 8 percent of the entire national health insurance program.

In order to combat people from taking advantage of lax policies, the government released a list last September naming those who had failed to pay for a prolonged period, though the number the ministry managed to verify was much smaller than the reality.

The situation also sparked controversy when officials discovered that some who were chronically late on payments were actually fairly wealthy.

“Some [insurance offenders] possess properties worth billions of won and freely enjoy overseas trips, but they never pay their insurance, which is a fraction of what they have,” said Saenuri Party Representative Shin Eui-jin, who serves on the Health and Welfare Committee at the National Assembly.

“We should adopt tougher rules to punish those people and restore the financial stability of the cash-strapped national health care system,” she said last year.

“Although the law allows the ministry to restrict coverage for insurance offenders, so far, we have waited until people voluntarily fulfill their obligations,” said an official from the Health Ministry who spoke on the condition of anonymity.

The ministry will, however, exempt those with lower incomes from the new regulation, though they did not specify which income levels. Under the new regulation, university hospitals and clinics will also be required to check whether patients have insurance coverage and identify insurance offenders using the information gathered by the National Health Insurance Service.

“Hospitals will identify them in step with the government’s intention to properly collect insurance fees,” said Song Hyung-gon, a representative of the Korean Medical Association, which represents doctors nationwide.