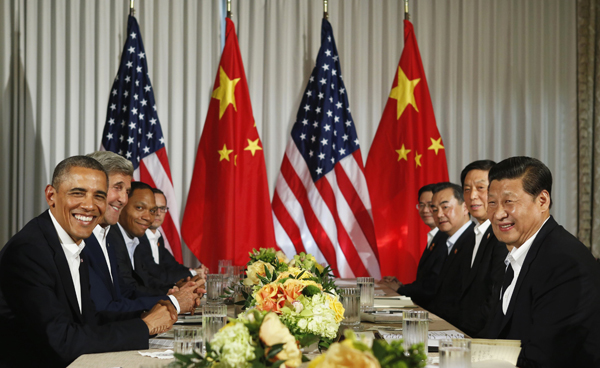 In April 2013, China and the United States agreed to form a joint research team to reduce hydrofluorocarbon (HFC) emissions. At the G-20 summit in September, Washington and Beijing proclaimed the two countries shared the same position on responses to climate change.

China, which initially opposed the Western proposal, has since changed its position. It now actively supports a reduction in carbon emissions after becoming the world’s biggest greenhouse gas emitter, followed by the United States. Domestically, China has announced a 10-point plan to clean up pollution, exhaust reduction requirements and expand alternative energy to aggressively reduce pollution.

What made China change its position? First of all, the health of the Chinese people is a growing concern. Lately, a number of reports have presented shocking correlations between carbon emissions and decreases in human longevity. The most notable was called “Evidence on the Impact of Sustained Exposure to Air Pollution on Life Expectancy from China’s Huai River Policy” by the Chinese Academy of Social Sciences.

According to the report, the life expectancy of people living north of the Huai River was five and a half years shorter on average than those living south between 1991 and 2000. The cause seems to be the toxic smog from the coal that has been provided, free of charge, for heating in the winter seasons in the northern area. The resistance of the people to such levels of pollution and the possibility of political unrest against the Communist Party are growing.

Second, China has made $300 billion in direct investments on resources abroad through three state-owned oil companies - PetroChina, Sinopec and Cnooc - since the late 2000s. The center of China’s energy policy has shifted from coal to petroleum. With its growing economic power, China now can afford to support the global drive for green energy and more aggressive responses to climate change.

According to McKinsey and Company, China depended on coal for 79 percent of its energy needs in 2010, but that will drop to 30 percent by the year 2030. The dependence on shale gas will increase from 1 percent to 13 percent in an equally dramatic transition. China is seeking partnerships with American companies to exploit its vast resources of shale gas. In order to secure the necessary approval of the U.S. government to adopt new technologies, Beijing is supporting U.S.-driven counter-pollution plans.

Third, American companies are now accepting the U.S. administration’s carbon emission tax as a fact and are responding promptly. Major petroleum companies like Exxon Mobile, Chevron, BP and Shell, and 29 business giants including GE, Microsoft, DuPont, Walmart and Google have been supporting the Republican Party’s opposition to the carbon emission tax. But they have given up any real hope as President Barack Obama plans to sign an executive order without going through Congress.

The hope of the United States is to reduce its 2005 carbon emissions amount by 17 percent by 2020 and 80 percent by 2050. American companies have turned to utilizing the carbon emission tax as a new growth engine for the future. For example, they see vast opportunities in the Asian market, especially China, by investing in shale gas-related projects, selling equipment and dominating industries making low-pollution vehicles and parts.

These changes are fortunate for us. As China lowers its reliance on coal, the pollution that reaches the Korean Peninsula from China will decrease. But we need to consider some risk factors as well. China will use all of its lobbying influence to draw shale gas technology from the United States, and American companies will seek new business opportunities in China. Korean companies need to prepare thoroughly for the new, vast energy market in China. The Korea-China relationship is already about economics, and that will only grow.

*The author is a visiting professor at the Korea Advanced Institute of Science and Technology.