Kim hints at big plans for Olympics in Pyeongchang

Kim hints at big plans for Olympics in Pyeongchang 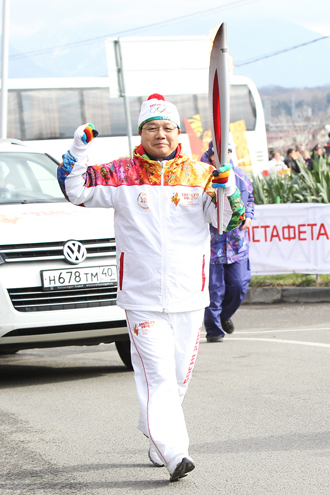 Kim Jin-sun runs on Wednesday in Sochi, Russia, with the Olympic torch in his hand. Provided by Pocog Media Team

SOCHI, Russia - Kim Jin-sun waited 20 years for this moment. Here in Sochi, along the shores of the Black Sea on Wednesday, the president of the Pyeongchang Organizing Committee for the 2018 Winter Games began his 200-meter (218-yard) sprint along the streets of the Russian resort town, the Olympic torch placed firmly in his hand.

As Kim jogged through the streets of Adler district, some witnesses claimed they saw him cry tears of joy. Indeed, the committee president is known for his strong expression of emotion.

In 2011, he fought back tears on stage when South Korea won its 2018 bid to host the Olympic Games in Pyeongchang. Kim was formerly the governor of Gangwon and led two previously unsuccessful campaigns for the city to host the event.

Sochi was once a point of contention for many in Pyeongchang. Korea got beat out by the Russian city in its bid to host this year’s Winter Olympics based on a strong show of support from Russian President Vladimir Putin.

Since Korea won its bid for 2018, however, Sochi has turned into a source of hope - and some tension, as it immediately precedes the Games before Korea’s first Winter Olympics. Kim will be handed the Olympic flag at 2014’s closing ceremony at the end of this month, which means Pyeongchang doesn’t have too much time left to prepare.

But Kim has a knack for thinking ahead and is already making plans with efficient and elaborate care.

Kim met with reporters after completing the torch relay to cheers of support from locals. “This is the moment when I really feel in my bones that time is fast approaching for Pyeongchang,” Kim said.

When asked to elaborate on his plans for the 2018 Games, he would only hint, much to the disappointment of the media. “I can tell you this at least: It will truly be a Pyeongchang-style Olympics,” he said.

But despite Kim’s cryptic response, his enthusiasm was infectious, and the camera crews present couldn’t help but smile and share his excitement.

Starting with the Olympic torch relay, the organizing committee has embraced a series of opportunities to get the news out about Pyeongchang. On Sunday, the city will host Pyeongchang Day, which will be recognized by the International Olympic Committee (OIC). IOC President Thomas Bach is scheduled to attend the official ceremony, which is slated to take place in the afternoon.