North threatens to call off reunions

North threatens to call off reunions 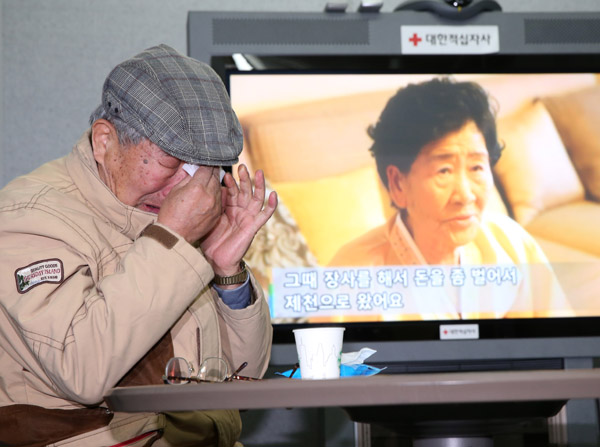 Lee Eung-su, 77, sheds tears yesterday in the office of the South Korean National Red Cross in Seoul after learning he was not selected for a family reunion. Lee wanted to see his family members in North Korea, whom he and his brother left behind when they defected to the South during the 1950-53 Korean War. By Ahn Seong-sik

One day after agreeing to hold the reunions of families separated during the 1950-1953 Korean War, North Korea threatened to cancel the event.

North Korea’s National Defense Commission yesterday took issue with the flight of an American nuclear-capable B-52 bomber over the west coast of the Korean Peninsula on Wednesday.

Pyongyang also called into question the joint military drills with the United States, which are scheduled to start on Feb. 26.

“It makes no sense to host reunions in the middle of a treacherous nuclear war rehearsal,” said North Korea’s top military body, which is chaired by North Korean leader Kim Jong-un, in a statement. It urged South Korea and the United States, once again, to suspend the annual drills.

“South Korea’s belligerent maniacs are feverishly preparing to push ahead with the war rehearsals, claiming they are irrelevant to humanitarianism,” the commission said. “We have prudently considered the South Korean leader’s opinion to the fullest that the reunions will mark the first step toward improved inter-Korean relations.

“But South Korea is running to the extreme with a showdown, despite our sincerity and efforts.”

The ministry also said in a statement, “The annual defensive drills are separate from the reunions, and they will be carried out as planned.”

The reunions, under an accord reached Wednesday between Seoul and Pyongyang, were to take place from Feb. 20 to 25 at the resort on Mount Kumgang in North Korea.

The annual Key Resolve military drills are scheduled from Feb. 24 to March 7 and will be followed by the Foal Eagle drills from early March until late April.

The reunions partially overlap with the Key Resolve military drills, and South Korean officials were concerned the North would take issue with them at the meeting on Wednesday.

The Communist country traditionally shuns interacting with the South during military drills it deems “war rehearsals.”

That fear materialized a day after the two Koreas reached consensus on the dates of the reunions and detailed procedure to prepare for them.

A group of South Korean officials were to be dispatched to North Korea today to check the heating facilities and electricity at Mount Kumgang.