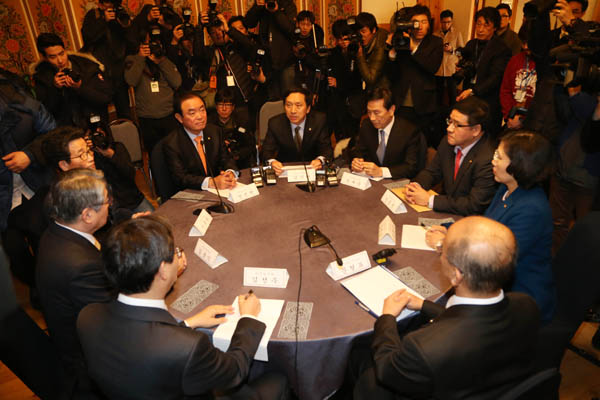 Lawmakers from both ruling and opposition parties hold a consultative meeting with Moon Hyung-pyo, minister of health and welfare, yesterday at the National Assembly to discuss how to iron out a consensus on the basic subsidy policy for seniors 65 and older. During her election campaign in 2012, President Park Geun-hye made a public pledge to give basic subsidies to all seniors. Participants in the meeting agreed to make their best efforts to write a bill by Feb. 20. They also agreed to form a five-person consultative body to draft a basic subsidy policy as soon as possible. The group consists of two lawmakers from the ruling and opposition parties, and the health and welfare minister. The lawmakers present were Kim Gi-hyeon, Ryu Jae-jung, An Chong-bum and Kim Hyun-sook of the ruling Saenuri Party; Kim Sung-ju, Kim Yong-ik, Rhee Mok-hee and Jang Byung-wan of the opposition Democratic Party. By Kim Hyung-soo