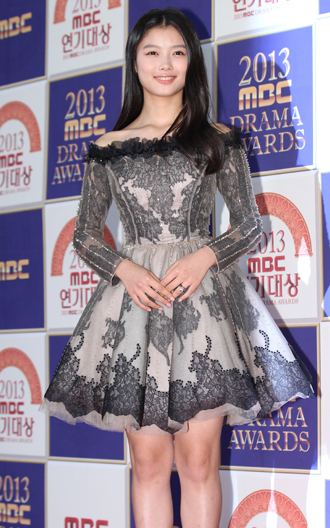 Actress Kim Yoo-jung, of the MBC drama “The Moon Embracing the Sun,” is acting in a short film in the United States, her agency, Sidus HQ, said yesterday.

In the horror movie “Room 731,” she plays a teenage girl named Wei who was put in a concentration camp by the Japanese Army during World War II. The movie focuses on unit 731, which was established so that the Japanese could perform medical experiments on humans.

Actor Tim Kang of the American TV drama “The Mentalist” helped produce the film, along with other producers from big-name films such as “The Dark Knight” and “Avatar.”

The movie is expected to open in the United States in July.

Meanwhile, Kim is appearing in the film “Elegant Lies,” which will open in Korea next month.

The movie is about how Go and Kim try to find a secret hidden by a dead 14-year-old girl named Cheon-ji, played by actress Kim Hyang-gi of the MBC drama “The Queen’s Classroom.”

Cheon-ji’s mother will be played by actress Kim Hee-ae of the tvN entertainment show “Sisters Over Flowers.”