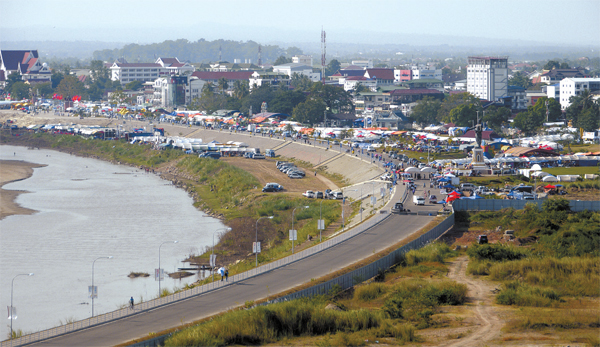 A new embankment off the Mekong River in Vientiane, Laos, was built by the Korean government through its Economic Development Cooperation Fund. Finished last month, it is being used by locals for taking walks, jogging or enjoying other leisure activities. Provided by the Export-Import Bank of Korea

People getting off work descend on the western bank of the Mekong River in Vientiane, the capital of Laos, on a recent evening. Some jogged along the embankment. Others performed group exercises in front of the river. Such scenes were rare before a 12.3-kilometer (7.6-mile) embankment was completed recently.

For thousands of years, the Mekong’s flooding has been a problem for Laos that causes $400,000 worth of economic losses every year because of the erosion of the river’s banks.

That problem may now be over, at least in the capital. The new, sturdy embankment, initiated with Korea’s loans and featuring Korean technologies, was completed on Jan. 10 after five years of construction. Property prices in the area have already jumped 10-fold as a result of the project. A 60-year-old resident, who said he had suffered through severe flooding four times in his life, said he was relieved not to have to worry about flooding any more. “I am thankful to Korea and Koreans,” he said.

Similar gratitude toward Korea was felt in Siem Reap, Cambodia, when a reporter visited the northwestern Cambodian city on Feb. 6. The home of Angkor Wat has long suffered water contamination due to the lack of a sewage disposal system.

The locals are anticipating the completion of the Korean government’s project to improve the rivers in the area, which began in 2011 at a cost of $30 million. The project will be completed by June.

Change was in the air in Siem Reap. The floating houses on the rivers had been moved and the rivers were wider. Residents were fishing in clean water, where children were bathing. A supervisor sent by the Cambodian government said that sanitation conditions for residents have improved significantly. Local tourism services centered on Angkor Wat are also improving thanks to the project, so the country is expecting growth in tourism revenue, he said.

Laos and Cambodia are experiencing a Miracle on the Mekong, the Southeast Asian version of the Miracle on the Han River, with the help of aid projects by the Korean government.

The main platform of Korea’s overseas aid is the Economic Development Cooperation Fund (EDCF). The EDCF is different from grants that are provided for free. The fund is mainly used for projects involving infrastructure such as dams, rivers, airports and roads.

“Unlike free grants, we can enhance the responsibility of the beneficiary countries and the transparency of the aid,” said Yoon Tae-yong, a director of the Ministry of Strategy and Finance, which dispenses the fund.

The EDCF is giving opportunities to Korean companies as well. The projects funded by the EDCF come with strings attached that Korean companies participate in the projects. Building contractors that are suffering from sluggish construction orders in Korea are expanding overseas thanks to the EDCF.

“Based on the experiences we have acquired here, we are now submitting bids for many infrastructure construction projects in Southeast Asian countries,” said Kim Ho-sik, a senior vice president of Isan Corporation, who is heading the company’s branch in Laos. “Thanks to EDCF, we have been stepping up to become a global company.”

There are many countries providing aid, but China and Japan are Korea’s two primary competitors.

Japan has provided loans to developing countries over several decades. China, seeking to expand its political and economic influence around the world, is quickly expanding its overseas aid, too. They provide help in building things in developing countries, but like Korea, they are also trying to capitalize on a favorable local mood gained from aid projects and get a toehold in the beneficiary countries’ new business sectors.

In design and supervision, Korean contractors are improving their standing in developing countries, particularly in the Southeast Asian region.

But for the construction itself, the most labor-intensive part of the projects, Chinese building contractors are ahead with their price competitiveness.

In the case of repair and improvement projects for roads in northern Vietnam, which is being led by the Asian Development Bank, Isan Corporation won a bid for design and supervision, but a Chinese company got the building project after submitting a price that was half of the bids submitted by Korean companies.

Analysts believe Korean companies will steadily make inroads into developing countries with the help of their government’s aid projects. Word of mouth from the comprehensive development project of the Mekong River has been successfully spread around the region, and requests are flooding in for Korean companies to take charge of projects in Southeast Asian countries, people with knowledge of the matter told the JoongAng Ilbo.

Myanmar, which is emerging as an up-and-coming market in the region, is also accelerating its economic cooperation with the Korean government. In December, the Ministry of Land, Infrastructure and Transport reached an agreement with its government to allow Korean companies to set up a master plan to improve a 610-kilometer section of the Irrawaddy River.

“If we don’t stay active in this aid area, companies from Japan and China could dominate the infrastructure market in developing countries,” said Heo Nam-cheol, a senior official of Korea Eximbank.