Intel wants to be inside mobile devices, too

Intel wants to be inside mobile devices, too 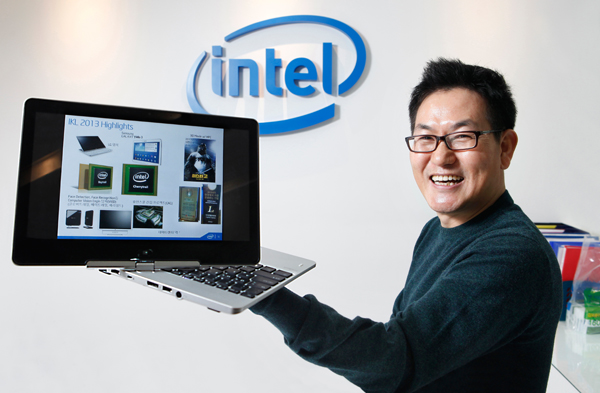 The decline of the global personal computer market appears to be more rapid than its emergence. On Thursday, Sony announced the sale of its PC unit, led by the well-known Vaio brand, to an investment fund from Japan.

Does such a change bode ill for another giant in the rapidly changing information and telecommunication industry such as Intel, a name synonymous with PC processors?

The statistics suggest that will be the case. The U.S. chip maker said last month its net profit last year was $9.6 billion, down 13 percent from a year earlier. It announced a plan to reduce its work force by 5 percent this year.

The trend, however, did not erode the confidence of Lee Hee-sung, who has been at Intel Korea for 23 years, with the last nine as its head.

During a recent interview with the Korea JoongAng Daily, the 51-year-old country manager expressed optimism over Intel’s growing opportunities in mobile computing devices.

Intel currently has a meager presence in the market for processor chips in smartphones and tablet PCs, technically called mobile application processors. According to Strategy Analytics, Qualcomm led the global mobile AP market with a share of 34.8 percent last year, followed by MediaTek, Apple, Spreadtrum and Samsung Electronics.

Most of the mobile APs are based on low-voltage core technologies developed by ARM, an English company. Intel is also waging an uphill battle against ARM to seize a share in the mobile core solutions market.

Lee said the company is moving quickly to duplicate its success with PCs in the mobile industry and beyond with development of technologies tailored toward the new business environment. The company is getting ready to remain a household name for any new phase in the development of computing devices, he said.

A long-time observer of the local IT industry, which has gained global attention for its companies leading the mobile industry such as Samsung Electronics, Lee also talked about his company’s relationship with Samsung. 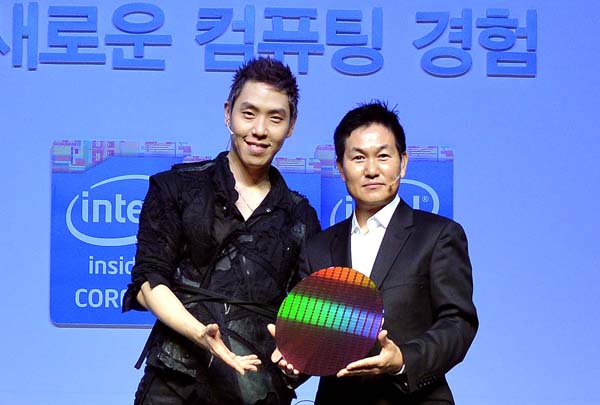 Q. The focus of the computer business is shifting from desktop PCs to mobile devices. What kind of strategies does Intel have for this change?

A. Intel has looked at the mobile market for a long time and has tried to make inroads into it. We announced MID, or the Mobile Internet Device, which provides multimedia-capable wireless Internet access, for the first time in 2005. It was a kind of a prototype for the tablet PC. The limited capacity of the operating systems, and the shortage of apps, made it difficult for a related ecosystem to mature at the time, and we could not make it successful, but still it was a meaningful move in that we were able to read the direction that the market was evolving and how consumers’ demand was changing.

Since 2005, we have spurred our efforts to develop low-voltage, high-performing mobile processors. We continued developing architecture tailored toward mobile devices and were able to announce Atom “Silvermont” architecture last year. It was a high-performing, low-voltage architecture that has no problem for use in tablets and smartphones. Last year, we had a significant success in mounting the tablet processor Clover Trail + on the Galaxy Tab 3.

This year, more Intel solution-based tablets will come out. Intel sees this year as a base year to expand x86-based Intel tablets. Our goal is sell Intel tablets to the extent our sales figure become meaningful in the mainstream market, and we will put more efforts than we have done in the expansion of our presence in the tablet market. To this end, we are also supporting various operating systems such as Windows and Android. You can expect it.


There is a rumor that Google’s Nexus 8 will feature Intel’s Bay Trail processor. Is it true?

Nobody knows until a product is released to the market. Intel does hope to work with an influential customer, but nothing is confirmed so far.


New concepts of computing devices are emerging such as wearables and the so-called Internet of Things. Is Intel ready to deal with such changes?

We announced a new system on a chip for the Internet of Things, called SoC Quark, at the Intel Developers Forum last year. We presented wearable devices such as an earbud that monitors vital signs and Mimo Baby products that track the health of babies during the International Consumer Electronics Show. Those devices are an example of our efforts to implant our Intel technology into every computing device in the era of the Internet of Things, IoT, or machine-to-machine communication. Intel has two approaches to the IoT market - one is to show a reference design to the market in order to show how the IoT could be realized, and the second to provide Intel technologies in helping realize the IoT world. We presented such a strategy at the CES and received positive feedback.


There is competition between many mobile device makers such as Samsung and Apple to develop their own platforms. How does this trend affect your company?

Intel’s goal is to make our chip work on any platform, hardware or software, Android or Apple.

From left to right: Lee Hee-sung, Intel Korea country manager, right, and Lee Ji-soo, head of the national computing research center at the Korea Institute of Science and Technology Information, agree on building a Parallel Computing Collaboration Center in December: Intel Korea employees and executives pose during the company’s spring event in 2013: Intel Korea hosts a camp for students who are hoping to compete at the Intel International Science and Engineering Fair. Provided by the company

Samsung is said to be more threatening to your company in the area of system semiconductors. How is your relationship with Samsung Electronics?

Intel made the first DRAM in the world. In the past, we competed with Samsung in memory chips, and we are a potential competitor in mobile APs. But almost every company in this industry has a dual relationship with other companies, being a rival sometimes and a partner at other times.

Our relationship with Samsung is no more or no less, I think. We will help develop the industry through competition. We will also cooperate in an area it is needed and help create a market and evolve it.


ARM is dominating the core solution market with its low-power processor. How do you compete with it?

ARM has traditionally provided low-voltage architecture. I gather that it is now trying to expand into high-voltage products. Intel, on the other hand, is expanding from high-voltage to low-voltage. When some said that Intel is trailing behind, it may have been right until last year. Things are moving toward tablets, and they need high-performing functions more than feature phones or smartphones, and such a change in the business environment is giving an opportunity to Intel. I think we are no longer behind ARM in terms of power.


The Park Geun-hye administration is boosting its efforts to lure foreign investment. Bringing more foreign investment into the IT sector could serve in favor of the government’s creative economy initiative. What do you think is the best way to attract IT foreign companies to Korea?

What is important is that local companies like Samsung and LG, which are good customers for foreign IT companies, would continue to grow as global companies. Only when the conditions are ripe for local companies to grow into a global corporation will foreign businesses feel attracted to having a local branch in Korea.

Secondly, it is important to regard Korea as an outpost for making forays into high-tech businesses in China. For example, German chemical firms are building factories in Korea because they are afraid of leakage of their technology if they build factories in China.


You have served as the country manager at Intel Korea for nearly nine years. That’s quite a long time. Do you have any post-Intel plans?

If it is possible, I want to retire after Intel. And after I retire, I would like to manage one of Korea’s small and midsize enterprises that are hoping to go onto the global stage.

I may be more serious about my hobby, theater acting, and could find a firm specialized in performing arts. I would like to run four or five companies after I turn 60.


What are your goals for the new year?

The year 2014 is an extremely important year with regard to mobile devices, and we see great potential in it. I think it will be a year to lay the groundwork for flying high for Intel. Intel will try to make inroads into the smartphone business and expand its tablet PC business. Recently, Gartner suggested as one of the top 10 topics for 2014 SDE, software defined everything.

Korean businessmen are the fastest in the world to adopt new technologies, so I think Korea will see a new momentum for doing business. 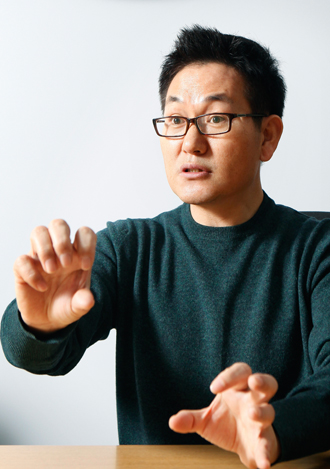