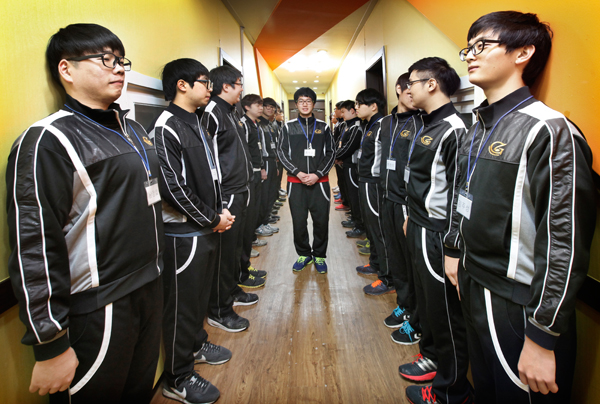 Jaesusaeng, or “study-again,” students at Goshiwon Academy, a boarding school in the suburbs of Yongin, Gyeonggi, prepare for a head count Wednesday in a dormitory. By Park Sang-moon

Last Nov. 7 was a do-or-die day for Kim Min-chan, a high school senior in Seoul. It was the day that he and hundreds of thousands of young men and women took the College Scholastic Aptitude Test, which would dictate what university Kim would get into.

When Kim got his results 20 days later, he realized that his dreams of going to a good school had died the day of the exam.

“Throughout my high school years, I stayed at school every night until 10 p.m. studying for the Suneong,” says the 18-year-old, using the nickname for the all-important test. “But I didn’t score well enough to go to the university I wanted.”

What occurred next was remorse, some grueling self-reflection and a solemn decision. Kim decided to go to an 11-month program at an educational institution dedicated to getting him into a decent college. Kim signed up on Dec. 21, barely a month after he took the CSAT.

“I came with my parents on enrollment day,” Kim says from Goshiwon Academy, a 30-year-old private boarding school on a remote mountain covered in pine trees in Yongin, Gyeonggi. “I told them I will not fail again.”

The idea is not that different from a fifth-year prep program in the United States. But this being Korea, the conditions facing jaesusaeng, or “study-again” students, are of a rigor that few American 18-year-olds would be willing to accept - or even believe.

The list of items forbidden at the school, which claims to be the country’s oldest such institution, illustrates the point. Cell phones, TVs, laptops, fashion magazines and books that are not related to the test, such as novels, are all on the list. A student is allowed to make a telephone call with permission for a teacher in his or her office.

For girls, make-up products are prohibited, as are hair dryers.

“We consider it [a hair drier] as an item that distracts them from studying,” Lee Sang-woo, the headmaster of the academy, tells the Korea JoongAng Daily.

“And although it is not mandatory for girls to keep their hair short,” Lee continues, “we recommend them to do so, saying it helps them focus on studying.”

Korea has a reputation for education madness that drives students to study relentlessly, attend expensive cram days and sometimes commit suicide. It’s not uncommon to see classrooms in normal high schools lit up well past 10 p.m. with students inside sighing over textbooks. One joke says the night view of Seoul is particularly striking because of all the office workers and students laboring into the night in their offices and classrooms.

However, for Korean, it’s not madness but rather reality, as the university one attends play a huge part in determining the success of his or her later life, including the type of job he or she can get and even marriage prospects.

Korean parents invest a lot into getting their children into the best possible university.

According to the Organization of Economic-Cooperation and Development, Korean families spend an average of 10.7 percent of their monthly income per child for private tutoring. Korea’s private education market is estimated to be 22 trillion won ($20.4 billion) as of 2008, according to the Korea Educational Development Institute.

“It is a big financial burden for us, but this was an inevitable choice,” says the father of a teenager boy surnamed Cho who was enrolled in Goshiwon Academy by his mother and father last Wednesday - inevitable because his CSAT scores just weren’t good enough.

“As he will be cut off from the outside,” the father continues, “my son will concentrate much better here on his studies.”

In fact, according to headmaster Lee, students forced to come to the school by their parents don’t usually survive.

“Students unwilling to be here can’t stand sitting at desks for hours and hours,” Lee says, “and quit the program within a week.”

When the Korea JoongAng Daily visited the campus last week, about 30 of students were enrolled, not a small number considering that the college admission process for next year won’t even be complete until the end of this month and the next CSAT is more than nine months away.

The 30-some students are mostly high school seniors like Kim who took the entrance exam last November and know they didn’t do well enough. They will have their not-so-pleasant high school graduation ceremonies this month. All will attend, and then swiftly return to their new home on a mountain kilometers away from the nearest convenience store and pick up their books.

The daily schedule begins at 7 a.m. Teachers wake the students and after five minutes of exercise, breakfast starts at 7:30 a.m. Classes run from 8:30 a.m. to 3 p.m. with an hour off for lunch. From 3 p.m. through 10 p.m., students study on their own, memorizing English vocabulary or solving math questions, without uttering a word. Dinner is also an hour.

At 10 p.m., students line up outside their dormitory-style bedroom for a military-style roll call. Then they resume studying on a desk next to their beds, usually until midnight.

The studying continues on weekends, although one three-day weekend leave is allowed once a month.

All students wear identical school-issued sweatshirts and pants. No personal clothing is allowed except for winter jackets.

“We provide a very restrictive set of rules for students to follow in order to provide them the best environment for studying,” said Kim Hyun-jong, one of the 25 teachers. The school is proud of its educational techniques and says they’ve been widely copied by 40-some boarding schools that opened after it did in 1984.

“There was once a time when corporal punishment was a common practice,” the teacher continues, “but we don’t do that anymore. Times have changed.”

But not everyone can adjust to such military-like restrictions. Park Joon-su, 19, who signed up for a boarding school in Icheon, Gyeonggi, in December 2012, said he couldn’t stand living there after a month.

“The classrooms looked like prison cells with bars on the doors. Teachers would peek through the bars to check on us, making me feel like I was imprisoned.”

The Goshiwon Academy charges 2.17 million won a month per student, which includes tuition, room and board.

The main three-story building on Goshiwon’s campus is used for classrooms and two other buildings are dormitories. Inside each building, surveillance cameras are installed, recording the students behavior round the clock. There are 13 CCTV cameras in the classrooms as well as the hallways of the main building and the dormitory. There are no cameras in the bedrooms or bathrooms.

“Parents can check on how their children are doing by accessing those CCTVs on the Internet,” said Kim of the Goshiwon. Usually, students’ mothers are interested in checking up on their children, especially in their first month, the school says.

Dating is strictly forbidden on campus, and to ensure it doesn’t happen, students are prohibited from conversing with members of the opposite sex, including in the cafeteria. Even a conversation about work is not allowed. If a student of one sex drops a pen, a student of the other sex isn’t allowed to retrieve it.

“Sometimes boys get excited when they hear a girl just enrolled and they ask whether she’s cute or not,” says Jeon Chan-yang, who enrolled at the academy last December. “But girls and boys can’t talk to each other here.” The 22-year-old student is on a leave of absence after a second year at a university in Seoul. She wants to transfer to a top-tier university.

“It may not be culturally and socially right to have these set of restrictions in place,” acknowledges headmaster Lee, who goes on to make a startling comparison between the school and an authoritarian government.

“The strength of a military government is its efficiency in achieving its objectives within a short period of time,” Lee says. “The same goes for here. For an overriding goal of going to the best colleges, students here willingly give up privileges they enjoyed outside. The point is whether you are ready to give up all that you enjoyed for eight to 10 months of your life.”

Asked whether there was an indoor gym for students exercise, a teacher replied brusquely, “That would be needless. Why waste their energy on something other than studying? That would only distract them.”

In an English class, a teacher was explaining the subtle points of English grammar, asking students the difference between two sentences that read, “If you are honest, I will employ you,” and “If you were honest, I would employ you.” Students busily took notes from the teacher, but no one bothered to talk to their classmates in English for practice - English speaking is not part of the crucial CSAT.

On the wall along a stairwell, frames were hung in a row. Each photo was of a graduate of the academy returning for a visit. One photo had eight graduates posing in front of the academy’s main gate, with a caption that read, “A visit by graduates who went on to top-tier colleges.”