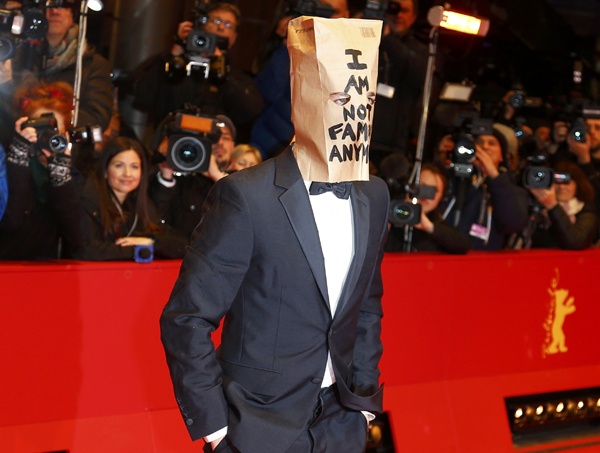 LOS ANGELES - After wearing a paper bag on his head to a red carpet premier and walking out of a press conference for his new film, actor Shia LaBeouf’s latest bizarre antic was to reveal an art project on Tuesday.

LaBeouf, 27, a former Disney star who later became known as the lead of the “Transformers” film franchise, set up an art installation titled #IAMSORRY at a Los Angeles gallery, to run daily from 11 a.m. to 6 p.m. local time until Sunday with free admission.

About 30 people lined up to enter the gallery one by one, where each attendee is asked to pick one item from a table that held a wrench, a vase of flowers, a bottle of bourbon, Hershey’s chocolate kisses and other items.

Gallery visitor Maycie Thornton said she had taken a flower from the vase and then was escorted through a black curtain into a dark room, where LaBeouf was sitting with a paper bag with the words “I Am Not Famous Anymore” on his head.

He wore a similar bag bearing the same words at the Berlin Film Festival premiere of “Nymphomaniac.”

“You can still see his eyes, and it was like, it was kind of wet under, it looked like he had been crying and his eyes were like so sad. So I just immediately got so awkward, because you’re like trying to talk to someone who is not talking back to you, in this room by yourself,” Thornton said.

Another excited fan, Alex Schlagel, asked the actor to remove the paper bag from his head, and then told him how much she enjoyed his films, before leaving him her phone number. LaBeouf does not verbally communicate with the attendees.

“It was weird to be excited because he was so sad, and then I didn’t know what else to say, so I asked if I could take his bag off,” she said.

LaBeouf’s art project has been compared to that of actor Joaquin Phoenix, who in 2009 displayed erratic behavior and an unkempt appearance at public events. Phoenix announced his retirement from acting to pursue a career as a hip hop artist. The stunt was later revealed to be the subject of Casey Affleck’s mockumentary “I’m Still Here.”

Whether LaBeouf is transitioning away from movies to become a conceptual artist or just finding novel ways to drum up press for his film work, the media have been amused and perplexed by his recent behavior.

The art project comes after the actor was accused of plagiarizing the work of graphic novelist Daniel Clowes in his short film “Howard Cantour.com” in December.

The actor took to his Twitter feed to apologize to Clowes, saying, “In my excitement and naivete as an amateur filmmaker, I got lost in the creative process and neglected to follow proper accreditation.”

Since then, the actor made numerous more attempts at apologies and cryptic tweets about creativity. In January, the actor declared he was “retiring from all public life” with the message “#stopcreating.” For nearly a month, his Twitter feed read, “I AM NOT FAMOUS ANYMORE.”