Internet a haven for data scammers

Internet a haven for data scammers 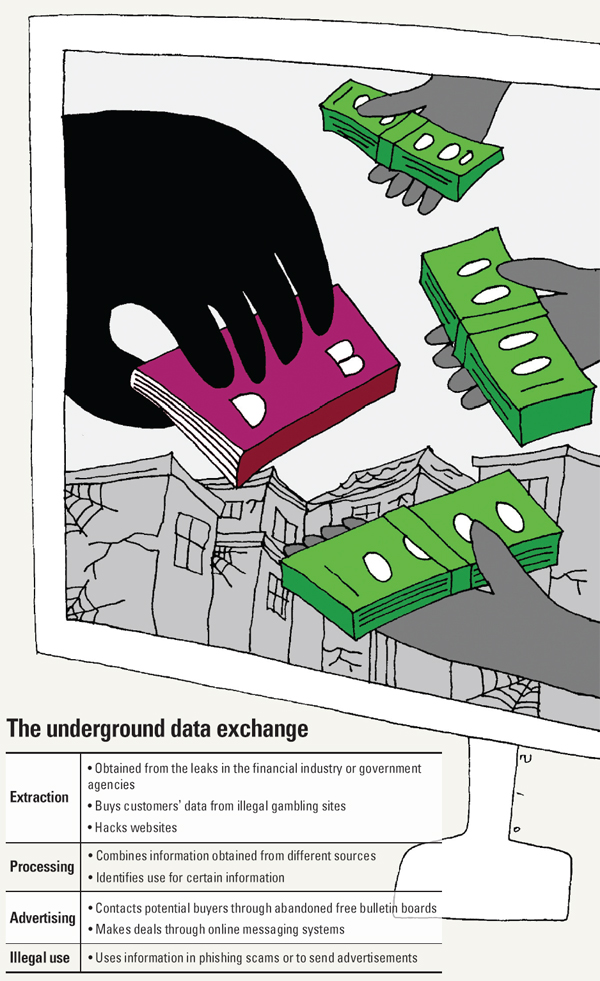 Scammers place advertisements on these boards, using them as a base to attract potential customers, many of whom are loan sharks or fraudsters looking to make a profit by taking another person’s identity.

The JoongAng Ilbo recently glanced through this underground market to see just how easily personal data could be obtained. On one portal site, when a reporter input the search term “selling data base,” hundreds of results popped up.

Data base, or DB, is an oft-used phrase on the black market to refer to stolen personal information. Most of the notifications that appeared in the search results were advertisements that personal-information sellers paste onto the free bulletin boards on various company websites. These sites are ideal for financial scammers and loan sharks, who often buy personal information to illegally access consumers’ bank accounts.

When a reporter contacted one of these sellers through an online instant messaging system, inquiring about his advertisement, he replied in less than two minutes. The data broker had posted his notices on the bulletin board of a website for a waste-recycling company, though it appeared as though the domain had been inactive for quite some time.

The seller attempted to negotiate a deal straight away. When asked if there was more recent information, the seller said that some personal data leaked from credit card companies was also available, adding that the cost of data for one person was 5,000 won ($4.66).

However, the minimum price for a deal, the seller said, is 3 million won.

Buyers can also request to “sample data,” the JoongAng Ilbo discovered, and peruse through consumers’ names, addresses, ID numbers and mobile phone numbers before deciding on a purchase.

When contacted, an official from the recycling company admitted that it was frustrating to see that the site was being used by scammers.

“We stopped using the [bulletin] board one and half years ago,” said the official, who requested anonymity. “I have no idea why the company site has turned out to be like this.”

However, that negligence is precisely what scammers seek to capitalize on. Hundreds of such advertisements already dominated the board. An informed site operator attempted to delete the posts, but more than 20 new ads appear each day.

Yet this company is just one of many that have become vehicles for such illegal practices. A closed online community catering to Korean-Canadians has also fell victim.

It once offered regular outings and scheduled activities, which it updated on the site. But it’s now home to a variety of ads that mostly sell illegally obtained information.

But the posts are not all about sales - there is the buying side as well. On the board of an Internet community for ethnic Koreans living in Yanji, China, one user was looking for someone to hack into an online storage site for the purpose of obtaining personal information. When contacted by the JoongAng Ilbo, the user said more than 10 people had already approached him.

Thirty-seven out of 42 posts updated during January regarded either the buying or selling of personal information. Aside from those posts, other ads promoted the sale of illegal drugs or gambling rings.

Prices for personal information depend on the type of information is exposed. When personal data contains loan records, it is considered highly valuable, sometimes two or three times more valuable than information containing just names or addresses.

“We classify the information mainly based on financial transaction records,” said one broker, who wished to remain anonymous. “That information is really popular, and we sell them at higher prices.”

Particular kinds of data usually help to lead scammers to more information about the victimized party. The tactic allows them to expand their base and sometimes obtain information about other family members of friends. Many of the scammers also get a hold of usernames and passwords of individuals subscribed to web portals or their email addresses.

In this case, they reclassify the data, categorizing it by website.

Unfortunately, despite the prevalence of these unlawful practices, the police say it’s difficult to hold the perpetrators accountable.

“It’s hard to determine whether a certain website is used or not,” said a police officer in the cyber crime division at the Seoul Metropolitan Police Agency. “And even if we closed the board, they will move to other sites.