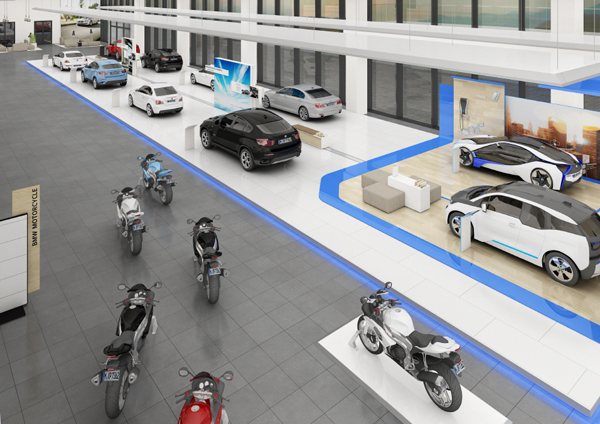 A computer-generated image of the interior of the BMW Group Driving Center’s Brand Experience Center. BMW will display all of its products in this building. The center opens to the public in July. Provided by the company

For many Koreans, having fun in the car is limited to getting out of congested traffic downtown and managing to open the throttle for a few moments on a highway.

Starting in July, BMW Group Korea is going to change that by opening its first BMW Group Driving Center in Asia.

The construction of the center, which is being carried out by Hyundai Development Company, is about 60 percent completed. 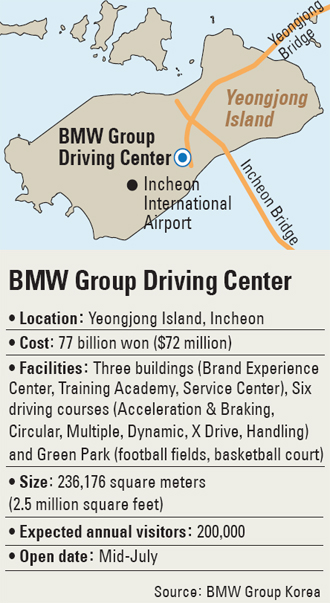 There will be six courses in the center, each providing different thrills. The six courses are Acceleration and Braking, Circular, Multiple, Handling, Dynamic and xDrive. As an example, the xDrive course, which tests BMW’s four-wheel drive system through eight types of road conditions, takes 30 minutes driving time and can be used by six different drivers at the same time.

Three buildings inside the center are starting to take shape. Workers were busy at a two-story Brand Experience Center, which will accommodate a convention hall, restaurants, a training academy, a service center and even a cart track for children.

The center will also have football fields and parks.

“It makes me emotional when visiting this place, because it kind of reflects 1995, when BMW first landed in Korea to develop the market,” BMW Group Korea President and CEO Kim Hyo-joon said at a press conference yesterday.

The Korean unit aims to sell 45,000 units this year, but Kim said that the company’s biggest goal for this year is promoting a new automobile culture with its driving center.

“It is no exaggeration to say that the BMW Group Driving Center is the nation’s first automobile theme park,” Kim, 57, said.

The driving center will be open to everyone, not merely BMW owners, according to Kim. He said it will have instructors properly trained and certified in Germany to ensure the safety of customers. The cost of the center is 77 billion won ($72 million). The local unit used its profits generated in Korea to build the center rather than remitting them back to German headquarters.

BMW Group Korea had sales of 1.9 trillion won and operating profit of 25.7 billion won in 2013, according to Kim. Net profit reached 16.4 billion won.

“I acknowledge it’s too soon to consider the driving center as a profit center,” Kim said. “But because this is Asia’s only BMW Group Driving Center, many other nationalities may want to visit this place. We are in talks with BMW units in China, Malaysia, Thailand and Japan. If this goes well and our systems get stabilized, we will also make money from it.”

However, Kim emphasized that the center is not for the benefit of BMW alone. It’s a place to enjoy driving.

“In other countries, there are opportunities for people to learn history and science through automobiles, but in Korea we don’t even have an automobile museum,” Kim said.