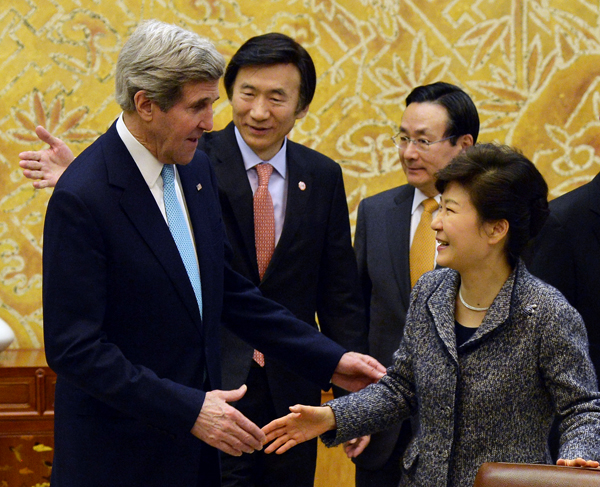 U.S. Secretary of State John Kerry reaffirmed that Seoul and Washington are on the same page in regards to North Korea in Seoul yesterday.

Kicking off a two-day visit to Seoul, Kerry held talks with President Park Geun-hye at the Blue House, where they coordinated policies regarding North Korean denuclearization and the situation in Northeast Asia. Seoul is the first stop of Kerry’s four-nation trip to the region.

The timing of Kerry’s visit was significant as it follows the first high-level talks between North and South Korea in seven years, which occurred Wednesday, and coincides with a second round of such talks scheduled for today.

A Blue House official said that Park and Kerry held deep conversation on the high-level inter-Korea talks and that Park took the opportunity to convey her concern about the Japanese government’s increasingly extremist attitude.

Park said she is “looking forward” to President Barack Obama’s visit to Seoul in April, which was announced by the White House yesterday. Kerry responded that amid “complicated historical issues,” there is a huge need to keep a strong and effective alliance.

Kerry then held talks with his Korean counterpart, Minister of Foreign Affairs Yun Byung-se, during which they were expected to have discussed the direction of the Korea-U.S. alliance as well as the situation on the Korean Peninsula. Yun is anticipated to have conveyed Seoul’s evaluation of the inter-Korea talks. They were also thought to have discussed efforts to facilitate reunions of families separated during the 1950-53 Korean War.

Kerry and Yun were expected to have underscored in their discussions that there is no difference in policies between Seoul and Washington in relation to North Korea and its denuclearization.

The visit also came ahead of two months of joint annual military drills between Washington and Seoul, which kick off Feb. 24. Every year the drills prompt threats from the North.

Another concern of the two countries is the continued detention of Korean-American tour operator Kenneth Bae after Pyongyang again rejected an offer by the United States to send a special envoy to negotiate his release.

Kerry and Yun are also expected to have discussed Obama’s Seoul visit in April and the freeze in Japan-Korea relations.

Kerry’s last visit to Seoul was last April when the two countries celebrated the 60th anniversary of their military alliance. More recently, Yun and Kerry met in Washington just over a month ago, which is significant because it was Kerry’s first talks with a foreign minister this year.

Yun’s January visit followed the shocking execution of North Korean leader Kim Jong-un’s uncle Jang Song-thaek in December, and the two agreed to intensify communication regarding North Korean affairs. Yun also conveyed to Kerry the need for Japan to acknowledge and apologize for its historical misdeeds.

A senior U.S. official told reporters ahead of Kerry’s arrival in Seoul that tensions between Seoul and Tokyo “serve nobody’s interests.”

Today Kerry heads to Beijing and is expected to encourage China’s cooperation in stepping up pressure on North Korea to abandon its nuclear weapons program. He is also likely to speak with senior officials regarding historical and diplomatic tensions with Japan, including their territorial disputes in the East China Sea, and climate change.

Last November, Beijing unilaterally declared an East China Sea air defense zone that overlaps with areas claimed by Korea and Japan, raising concerns from its neighbors and Washington. Kerry then heads to Jakarta and Abu Dhabi.