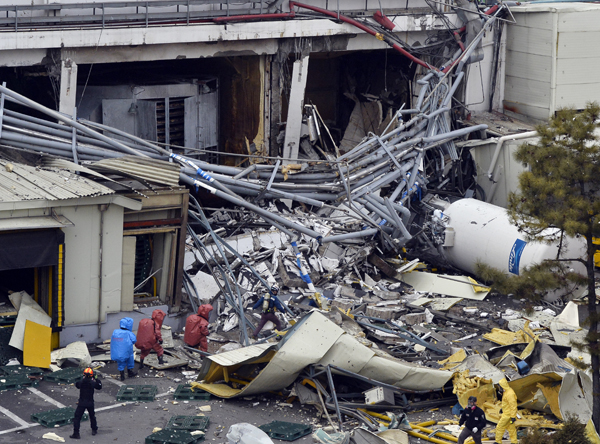 An ammonia tank pipe explosion at an ice cream factory yesterday in Namyangju, Gyeonggi, claimed the life of one person and injured three. [NEWSIS]

A pipe attached to a 5-ton ammonia tank exploded yesterday at an ice cream factory in Namyangju, Gyeonggi, leaving one worker dead and injuring three. A total of 1.5 tons of ammonia gas was leaked in the accident.

After the explosion, police and fire authorities found one person dead under the rubble in the factory, which is run by Binggrae, one of Korea’s major confectionery companies. Of the three injured, one person had both legs broken. The shockwave from the blast led other gas tanks inside the factory to fall, destroying part of the plant.

The company said it learned about the gas leak after employees reported a strange smell near the tank at 10:30 a.m. and took emergency measures to evacuate approximately 30 workers.

However, the snack producer did not notify the Korea Gas Corporation and the Namyangju City Government, the institutions responsible for the safety of the facility, and proceeded with an investigation on its own, which the injured workers are subject to.

The accident appears to have been triggered after a massive amount of ammonia became trapped inside the pipe when the workers checked the tank, according to the police.

The explosion caused a disturbance in the neighborhood, leading some citizens who were startled by the smell of the ammonia to evacuate their homes and take a shelter.

“The shockwave from the explosion was so enormous that the windows were shaking,” said a resident who lives in an apartment just 30 meters (32 yards) away from the plant.

Some nearby residents sought medical treatment because the gas stung their eyes, and convenience stores and pharmacies in the area were filled with people looking to buy masks.

Exposure to ammonia can cause headaches, nausea and apnea in a worst-case scenario.