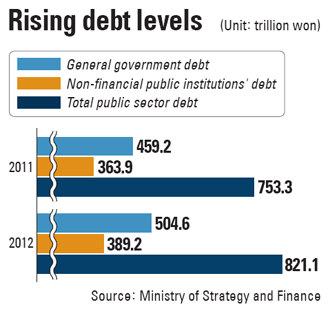 Korea’s total public sector debt stood at 821.1 trillion won, or $774.3 billion, as of the end of 2012, announced the Ministry of Strategy and Finance yesterday. That works out to around 16 million won per person.

It was the first time the ministry calculated the country’s debt by the international standard newly introduced by the International Monetary Fund.

That debt, which combines general government debt and nonfinancial public institutions, is the equivalent of 64.5 percent of the country’s GDP, the ministry said.

“We are the first country in the world to change our debt calculations in accordance with the IMF’s new guidelines,” said Lee Suk-joon, vice finance minister.

The IMF said in a statement, “It underscores Korea’s strong commitment to data transparency and adoption of internationally accepted best practices in the compilation of debt statistics.”

“The launch of these new data series will be followed with significant interest internationally and will encourage other countries to follow suit,” it added.

However, controversy might be aroused because the new statistics show a significantly lower national debt, which had reached nearly 1,000 trillion won under the old system.

The IMF standard does not take into account internal transactions between government agencies and excludes future allowances and guaranteed debt obligations.

Government-guaranteed debt obligations are around 145.7 trillion won. Some 72 trillion won in debt incurred in transactions among government agencies was also omitted. If all that debt was included, the total debt would reach about 1,506 trillion won.