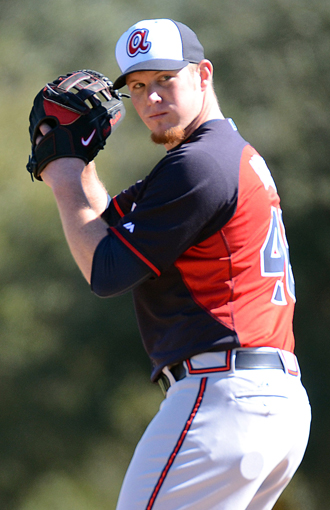 Craig Kimbrel saw the growing list of young Braves players committing to long-term deals and decided he wanted to jump on board.

Atlanta locked up another important piece of its foundation Sunday by agreeing to a $42 million, four-year contract with Kimbrel, the All-Star closer.

“I want to stay here with a group of guys that I came up with and I’m comfortable with,” Kimbrel told reporters. “In the game of baseball, it’s who you’re around, it’s the team you’re on and the guys you’re surrounded by. We have an awesome core here. I think this is a core that can win for a long time.”

The deal with Kimbrel came only two days after the Braves and right-hander Julio Teheran, 23, agreed to terms on a six-year, $32.4 million contract on Friday.

Kimbrel, 25, avoided salary arbitration. He was the last Braves player eligible for arbitration.

Kimbrel, from Huntsville, Alabama, said he wanted to continue to play close to his home base.

“First of all, I want to thank God for giving me the ability that he has and blessing me to allow my family to be so close to me and be in the place where I’ve grown up always wanting to be,” Kimbrel said. “Now, I get to say I get to be here for four or five more years. If I didn’t want to be here, this wouldn’t be going on. I couldn’t be any happier.”

“We are very excited to agree to terms with Craig, who we feel is the best closer in Major League Baseball,” Braves general manager Frank Wren said. “He is one of the key pieces of our pitching staff and we are happy to keep him in a Braves uniform for at least four more years.”

Kimbrel’s arbitration hearing had been set for Monday. The Braves offered $6.55 million and Kimbrel asked for $9 million.

Freeman agreed to the biggest contract in Braves history - $135 million for eight years. Heyward’s contract is for two years and $13.3 million.

The agreement with Kimbrel allows the Braves to retain one of Major League Baseball’s most dominant closers.

He has 138 saves in the last three seasons, including 50 saves with a 1.21 earned run average and 98 strikeouts in 67 innings last year.

Kimbrel has a 1.39 ERA with 381 strikeouts in 227 1-3 career innings. The hard-throwing right-hander has been successful in 139 of 154 career-saves opportunities.

Kimbrel can add value to his contract through a points system.