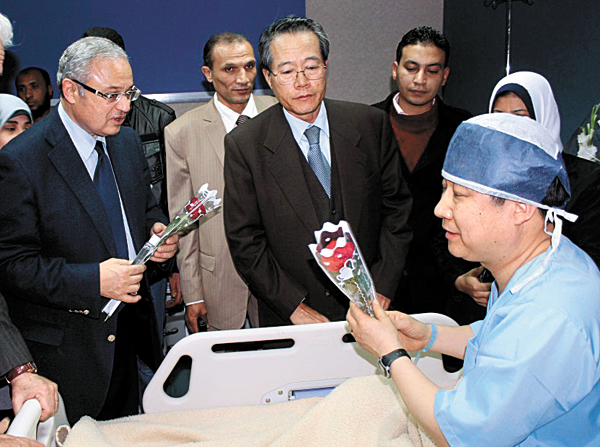 Egyptian Tourism Minister Hesham Zazoua, left, and the South Korean ambassador in Cairo, center, visit a Korean tourist who was injured during an explosion that targeted a tour bus as he received medical treatment in Sharm El-Sheik hospital, Egypt, late Sunday. [AP/NEWSIS]

What began as a spiritual pilgrimage to three countries for a Korean church group came to a bloody end following the deadly bombing of its tour bus in Egypt, near the Israeli border, Sunday afternoon.

Four people, including three Koreans, were killed in a bomber’s attack on a tourist bus in the Sinai region of Egypt, the Korean Ministry of Foreign Affairs confirmed yesterday. The bus carried 35 people in total, including two Egyptians.

There were 14 other injured Koreans who were receiving treatment at two nearby hospitals for wounds of varying degrees of seriousness, said a foreign affairs official.

Among the dead were Kim Hong-ryeol, a 64-year-old Korean female pilgrim, Jae Jin-su, 56, head of Blue Sky travel agency, and Kim Jin-kyu, 35, a tour guide from Korea. The fourth fatality was the Egyptian bus driver.

A group of 31 members of the Jincheon Central Presbyterian Church embarked on a three-country religious trip last Wednesday, accompanied by the two Korean tour guides who died. According to church officials yesterday, the group from Jincheon County in North Chungcheong was in the middle of a pilgrimage through Turkey, Egypt and Israel celebrating the 60th anniversary of the founding of its church. They had been expected back on Sunday.

After visiting the Greek Orthodox St. Catherine’s Monastery, a Unesco World Heritage site at the foot of Mount Sinai, the tour bus arrived in the small resort town of Taba, near the tip of the Gulf of Aqaba, close to the Israeli border.

It was there that the bus blew up while parked just several hundred meters from the Israeli border Sunday afternoon.

The explosion happened near enough to the Israeli border that an Israel Airports Authority CCTV camera caught the explosion, showing dark gray smoke mushrooming into the sky. Photos of the remains of the skeletal yellow bus show the heaviest damage at the front of the vehicle, with the doors and the windows blown out.

A man in his 20s appears to have boarded the tourist bus to place the bomb, according to witnesses. But he apparently escaped the blast unharmed.

An official from the Korean Embassy in Egypt said, “What appears to have been a suicide bomber seems to have boarded the bus and put the bomb near the driver’s seat before escaping.”

Earlier reports quoted local officials saying the bomb had been planted beforehand on the bus.

The injured people did not sustain life-threatening injuries, a foreign affairs official in Seoul confirmed. 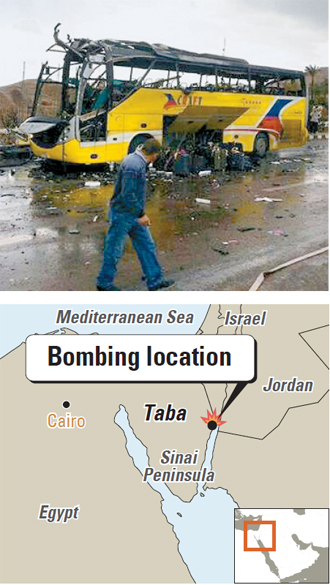 Above: An explosion ripped through a tour bus in the Sinai Peninsula, killing four South Koreans and the Egyptian driver. [NEWSIS]

According to officials, 15 of the Koreans who were not injured crossed into Israel yesterday afternoon and are expected to return to Korea as soon as possible.

A Sinai-based terrorist group, Ansar Beit al-Maqdis, yesterday claimed responsibility for the attack. Arab and Israeli media reported that the powerful militant organization said via Twitter, “We will continue to hurt the leaders in Egypt, the economy, the tourism.”

Ansar Beit al-Maqdis has previously claimed to be behind a series of other terrorist attacks in Egypt, including a car bombing in Cairo that killed five last month, the assassination of a top Egyptian police general, the attempted assassination of the interior minister and the shooting down of a military helicopter in the Sinai Peninsula.

Some observers believe there is a link between Ansar Beit al-Maqdis and the Muslim Brotherhood, which has been called a terrorist organization, with Palestinian militant groups.

Former president Morsi was being tried for terror and espionage on the same day of the attack in Cairo. President Park Geun-hye instructed her chief security adviser Kim Jang-soo to “ensure all measures for the speedy analysis of the situation, recovery of the dead bodies and rescue of the injured victims,” according to her spokesman yesterday.

The Korean Foreign Ministry condemned the terrorist attack yesterday and issued a special warning banning travel to the Sinai Peninsula and the Gulf of Aqaba region, calling on Korean nationals in the area to evacuate immediately. It urged Koreans in other parts of Egypt to consider leaving if possible. The Korean government also dispatched a response team of four officials - two foreign affairs officers, one national security agent and one policeman - to Egypt yesterday morning.

Egypt’s presidential office said the terrorist attack was a “despicable act of cowardice” and promised to bring the culprits to justice.

Ban “conveys his condolences to the families of the victims and to the governments of Egypt and the Republic of Korea,” his spokesman said, and “calls for the perpetrators to be brought to justice.”

In Korea, dozens of worried relatives and friends of the victims yesterday gathered at the Jincheon church and awaited news from their loved ones.

The elderly father of Oh Jeong-suk, a 47-year-old woman who was injured in the bombing, told the JoongAng Ilbo, “My daughter called me early in the morning. She said that her lips were split open and her leg had been hit by a shard [from the explosion].”

He added, “But the battery ran out even before I could find out where she was, and I can’t reach her anymore.” Now he is waiting at the church for his daughter’s safe return.

Victim Kim Hong-ryeol is survived by three children - a 37-year-old daughter and 35-year-old fraternal twins, a son and daughter. Kim was a widow who lost her husband seven years ago.

“It is unbelievable, agonizing and hard to endure,” Kim’s second daughter said. “My mother was a devout believer, but how could this happen?”

She and her husband, along with her twin brother, are set to land in Egypt today with a group of church officials.

A longtime friend of Kim for three decades, 63-year-old Mrs. Lee, recalled, “She was an incomparable friend. She said she will have a good trip and be back, so how could this happen? She was active in volunteering at church and led a much-respected life. Why did she have to die alone?”