China digs itself into dollar trap

China digs itself into dollar trap 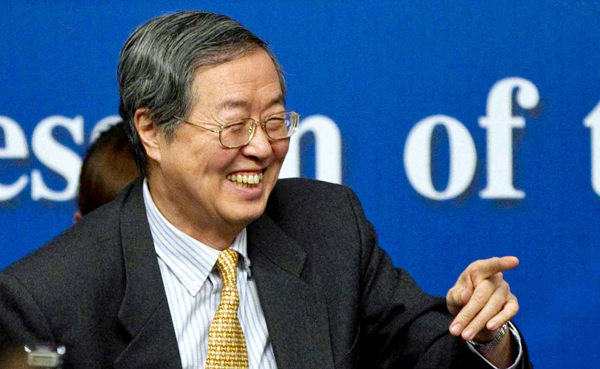 China’s Central Bank Governor Zhou Xiaochuan gestures as he leaves a press conference in Beijing, Monday, March 12, 2012. The head of China’s central bank said there is room to ease curbs on bank lending to support economic growth but gave no indication when regulators plan to do that. [AP/NEWSIS]

Reading Eswar Prasad’s new book, it’s easy to picture the entire global economy as a giant bird cage, with Jack Lew and Janet Yellen standing outside waving at all the unwitting creatures inside.

In “The Dollar Trap,” the Cornell University economist doesn’t paint the U.S. Treasury secretary or Federal Reserve chairman in sinister terms. Prasad’s argument is that for all the worries about U.S. policies and debt, and the many efforts to build up an alternative, the dollar’s linchpin role is only strengthening. What struck me most, though, is that China still can’t see that it’s the dupe in this giant pyramid scheme.

China’s $3.8 trillion of currency reserves are the largest stockpile ever amassed. Economists have long seen that money as a strength - the ultimate rainy-day fund should China’s shadow-banking system blow up. Trouble is, the value of those holdings depends on China’s $1.3 trillion of U.S. Treasuries. If they plunge in value, all hell breaks loose and officials from Beijing to Brasilia will scramble to exit the American bird cage.

The concept of such enclosures has great significance in feng shui. In the late 1960s, Macau tycoon Stanley Ho designed his Lisboa casino - featured in a James Bond film - to be a huge bird cage. The symbolism was obvious: We’ve got you and your cash trapped. China is looking like a big-money gambler who just knocked over a casino and can’t use the loot because it’s all in marked bills. If the mainland ever tried to spend down its Treasury holdings, the global financial system could collapse.

China’s central bank “faces the prospect of significant losses in its reserve portfolio if it were to disentangle itself from the trap through any precipitous actions to shift out of the dollar,” Prasad writes. And “the political fallout could be ugly if the Chinese public learned of the magnitude of these losses, which would be seen as a transfer of wealth to the U.S.”

Imagine the conspiracy theories that would consume a Chinese blogosphere already primed to see American treachery everywhere. Did you know that the White House wants a war between Beijing and Tokyo to slow China’s rise? Or that the Fed is depressing the price of gold to stop it from displacing the dollar as a haven? Or that the SARS virus was unleashed by the U.S. military to subjugate Asia? Such conjecture is all over Chinese cyberspace. Online, people seem to believe just about anything that doesn’t end with “LOL!”

Although the Communist Party wields great power over the masses, it remains extraordinarily sensitive to spikes in public outrage. Those worries are increasing amid tepid global growth, as Chinese leaders struggle to keep their own economy expanding at more than 7 percent. As Prasad writes, “China now has a strong incentive to support the dollar’s value, limiting its losses for the time being but at the cost of getting even more entangled in the dollar’s sticky web.”

The Chinese central bank is stuck in a dangerous cycle. Every time it clamps down on credit to curb excessive lending, markets panic, interbank borrowing rates skyrocket and policy makers back off. At the same time, a minicrisis in emerging markets this year will greatly complicate President Xi Jinping’s efforts to restructure the economy away from exports and hyperinvestment.

The irony is that that means even more dollar purchases. This dynamic runs counter to Beijing’s aspirations for a greater global role for the yuan, and to the desire of Russians and others to get the dollar out of their lives. Indeed, one no longer hears much about the regional bank Xi proposed in October, to invest in infrastructure across the region. The Chinese leader had pledged to provide funding from what essentially would be a local International Monetary Fund free from those pesky Americans. The only problem is that the $7 trillion-plus Asia would tap for such an enterprise is largely beyond its reach.

“So the choice the U.S. offers the rest of the world is simple: you get to choose when to take a loss on your holdings of our debt - now or later,” Prasad says. “Faced with this stark choice between two evils, many emerging markets end up being boxed into maintaining export growth by accepting the unpleasant trade-off of a loss on their reserve holdings in the future. The choices they have made - intervening in foreign exchange markets and accumulating reserves as a self-insurance mechanism - have only fueled U.S. fiscal profligacy and strengthened the dollar’s role in the global monetary system.”

If recent history telegraphs anything about the future, the only element of the global economy sure to grow in coming years may be the size of America’s bird cage.