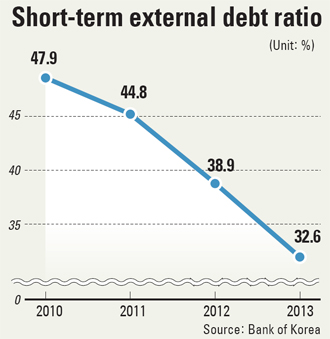 Korea’s ratio of short-term external debt to its foreign reserves eased to an eight-year low at the end of December, central bank data showed yesterday, as its reserves grew at a faster pace than its debt.

It is also 4 percentage points less than last year’s 31.1 percent.

The short-term external debt ratio has fallen steadily since reaching 79 percent in late 2008 due to a series of government regulations introduced to curb overseas borrowing and the economic slowdown.