Lotte is target of safety inspection

Lotte is target of safety inspection 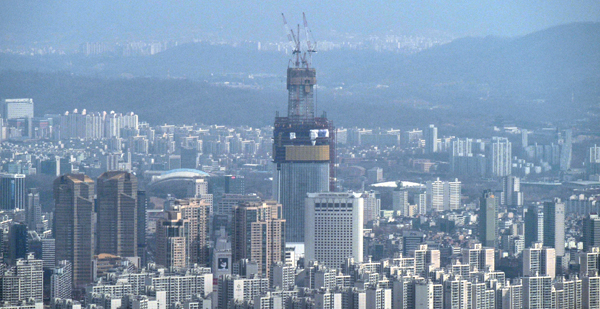 An aerial photo shows construction of the Lotte World Tower in Jamsil, southern Seoul. The Seoul Metropolitan Government announced yesterday that it would conduct a safety check on the building in the wake of a series of accidents involving the skyscraper. [NEWSIS]

The Seoul Metropolitan Government has stepped out to conduct a safety check on Lotte World Tower in Jamsil, southeastern Seoul, in the wake of a series of accidents involving the skyscraper set to be the nation’s tallest.

The government announced yesterday that it would form a consortium of construction-related experts and academics that will be responsible for a safety investigation on the Lotte project and other high-rise buildings across the city, including residences that stand higher than 30 floors. The government also vowed to install sophisticated fire prevention systems in those buildings.

“The Lotte World Tower construction site has experienced a chain of accidents, heightening the level of anxiety among the public,” said an official with the city government.

Worries surrounding high-rise buildings emerged after a welding machine sparked a fire on Feb. 16 on the 47th floor of the Lotte World Tower, otherwise known as the second Lotte World.

It stands next to the Lotte World complex, which includes Korea’s largest indoor amusement park.

Although the fire was extinguished in just 25 minutes and caused no injuries, residents - particularly those living in the neighborhood - expressed concerns, with some going so far as to demand Lotte reduce the skyscraper’s height.

In June, a worker at the Lotte World Tower construction site died after a piece of heavy equipment fell on him. Four months later, an iron pipe fell 50 meters to the ground, injuring a passerby.

But the most alarming incident occurred in November, when a private helicopter crashed into the iPark building, a deluxe high-rise apartment complex in southern Seoul.

The propeller clipped the structure, shattering windows and damaging the outside of the building between the 21st and 27th floors, before nose-diving to the ground. Both pilots were killed in the accident.

The government-led safety check will force Lotte to delay its original plan to open up the lower part of the building, which houses a department store and other facilities, in May.

Following the fire, construction was suspended by the order of the city government, and the safety check was issued. Currently, almost a third of the building has been finished. The building is set for completion in October next year and is slated to be 555 meters high, making it the world’s sixth-tallest skyscraper.

Since the project’s conceptualization in the early 1990s, authorities continually expressed unease about the building’s planned height and the site’s proximity to the Seongnam military airport, fearing the structure might be too tall to avoid the trajectory of aircraft. Lotte managed to obtain approval from the government on the condition that the airfield runway be adjusted by a 3-degree angle.