Despite the Korean economy’s continued sluggishness, business is booming for purveyors of pricey desserts, with customers standing in line at high-end department stores to pay twice as much as they would for sweets at their neighborhood shops.

Dozens of people stood in a zigzagging line in front of the Cheesecake Factory pop-up store on the first basement floor of Galleria Department Store in Apgujeong-dong, southern Seoul, recently. They were waiting to buy the famous American dessert chain’s flagship cheesecake for 8,800 won ($8.21) per piece. This temporary store - so small it can accommodate no more than two or three employees - generates more than 10 million won in daily sales.

Pop-up stores typically last a few weeks or months, but this is the third Cheesecake Factory pop-up since November, and the company plans to open a permanent branch at the Galleria next month.

The entire first basement floor of Hyundai Department Store’s main branch in Apgujeong-dong, southern Seoul, was packed until 2 p.m., when 18,000 won Mon Chouchou roll cakes usually sell out. The store brings in an average of 350 million won a day. 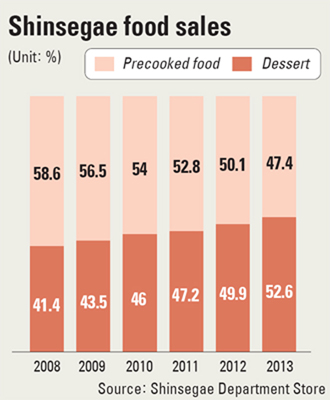 According to Shinsegae Department Store, sales of desserts surpassed precooked food in 2013 for the first time. In 2008, Shinsegae sold 40 billion won in desserts compared to 90 billion won last year after double-digit growth for five straight years. Hyundai Department Store has also seen sales growth of as much as 340 percent in recent years. Among brands the store has added are PN Poong Nyun bakery from Jeonju, North Jeolla, Japanese pudding maker Tororing and chocolatier MarieBelle of New York.

In explaining the surge of high-end desserts, experts cite Korea’s widespread dessert culture and the increasing numbers of young women who prefer to eat desserts instead of a daily meal.

“Unlike the trend of pursuing a healthy lifestyle, people tend to purchase desserts with high calories or a strong, sweet taste,” says Park Bo-young, a deli buyer for Galleria Department Store.

In addition, experts say people tend to spend more on desserts as a luxury treat to make them happy and, at prices of 10,000 won to 20,000 won, which they can afford.

Retailers also try to take advantage of the so-called dessert effect, when a product goes viral and people visit the department store to see it for themselves.

Competition among department stores to be the first to bring in trendy brands can be fierce. Representatives visit overseas headquarters and work for months to persuade dessert companies to work with them. 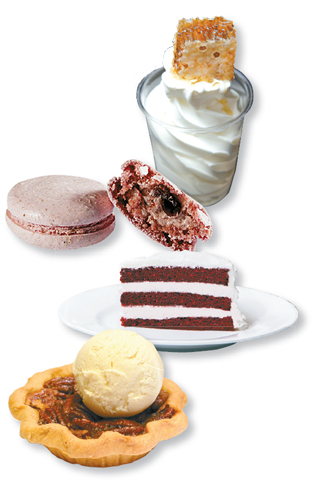 “We spent more than a year to bring the famous patbingsu [shaved ice with red bean paste and other toppings] house Dongbinggo to our Lotte Young Plaza in Sogong-dong,” says Joo Won, head product merchandiser at Lotte Department Store.

“At first, Mon Chouchou hesitated at our suggestion to enter the Korean market because of their Hokkaido-produced whipped cream, which could face customs problems [after the Fukushima nuclear disaster]. Just to convince the company, we had to study customs issues ourselves. We even visited the Ministry of Food and Drug Safety,” says Cho Chang-hee, a buyer at Shinsegae Department Store.

Another hurdle for retailers is that most famous dessert houses are independently owned and make their products on site. In such cases, owners often decline to open a branch because of concerns over maintaining quality.

“I sometimes visit stores that already declined our suggestions many times. But who knows when they might choose us over others, when they become more open to expanding their business?” says Park from Galleria Department Store.

Many of the hottest dessert stores are located in Garosugil, the tree-lined neighborhood in Sinsa-dong, southern Seoul, where luxury showrooms are concentrated; Hongdae, near Hongik University in western Seoul, where hip young people hang out; and Seorae Village, the small and exclusive French community in Banpo-dong.

Bing Bing Bing, a patbingsu store from Hongdae, and Churro 101, from Seorae Village, were huge hits as surprise pop-up stores.

Recently, the so-called dessert matjips (or delicious restaurants) from outside Seoul have joined the boom.

PN Poong Nyun bakery in Jeonju, North Jeolla, has been in business for over three generations, since 1951. A Korean-style bakery whose flagship item is chocolate pie, the chain accounts for the largest part of the dessert department at the main, trade center and Mok-dong Hyundai Department Stores.

Foreign dessert brands are receiving more attention than ever.

“A person living in Busan called us once and asked if our cheesecakes are the same Cheesecake Factory cakes that she had in the United States. She almost pleaded with us to ship one to Busan, saying she is totally willing to pay, regardless of the amount,” says Park.

Also, some online dessert sellers are going offline. A macaroon maker called Otera, which became famous through the Internet, recently opened its first store at Hyundai Department Store in Joong-dong.

The dessert boom started in Seoul, but it is expanding to department stores in Suwon, Daejeon and elsewhere.

However, department stores worry that such rampant popularity can’t last.