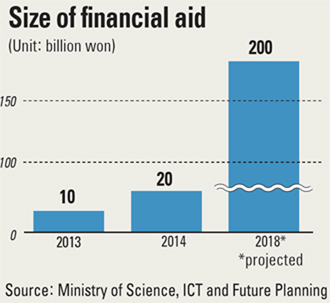 After awarding a total of 10 billion won ($9.3 million) in support to eight start-up ventures last year, the government will double the amount available for grants and loans in 2014 and expand the program to all four of the country’s special R&D zones.

Administered by the Industrial Bank of Korea (IBK), the program is part of the Ministry of Science, ICT and Future Planning’s tech start-up financing initiative. The first year of the program was limited to companies in the Daejeon R&D zone that had difficulty obtaining loans from commercial banks, and this year it will apply to the Gwangju, Daegu and Busan R&D zones.

In addition, the ministry will expand funding of the program to as much as 200 billion won annually by 2018.?

An official from the ministry added that the program will eventually be open to all ventures, including those that do not belong to the four R&D zones.

The eight companies funded last year were chosen from 48 candidates after a screening process by the IBK and R&D special zone foundation. The process included a mentoring program concerning commercialization strategies and investor relations.

Each of the eight companies received grants and loans of as much as 2.5 billion won. The winning companies were private ventures in the chemical, software and manufacturing industries.

“For many small ventures, receiving loans from the IBK actually enables them to market themselves to other investors and banks, because it is evidence of corporate credibility and how financially secure the company is,” said an official from the science ministry.

For high-tech ventures, the ministry manages a fund along with the Korea Finance Corporation, local governments, private investment companies and angel investors.

The group had given about 39 billion won to 19 high-tech ventures as of 2013 and hopes to raise 125 billion won for the fund this year.