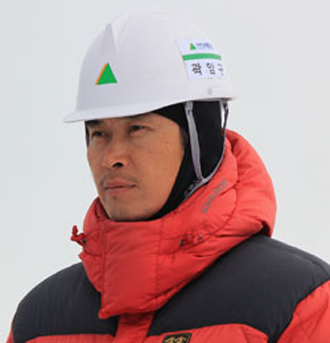 Kwak Im-ku, the commander of Jang Bogo Station, Korea’s second research center in Antarctica, is anxious, and the technicalities surrounding the institute’s completion have weighed heavily on his mind.

“Normally after the building completion ceremony, I would feel relieved but I don’t,” he said.

“Some parts still need to be constructed. I will feel a bit uneasy until it is all over and I can leave,” Kwak added.

His voice, which was transmitted through a portable satellite communication device from approximately 13,000 kilometers (8,077 miles) away - more than a third of the Earth’s circumference - sounded stiff and coarse.

Overseeing the establishment of the nation’s second scientific research institute in the world’s last great wilderness is no easy task. Kwak, 49, of Hyundai Engineering and Construction, Korea’s largest builder, has been Jang Bogo’s site manager since work on the station began in December 2010.

Four construction companies have had a part in building Jang Bogo, dispatching more than 300 employees. The station itself contains 16 laboratories and 24 observation facilities across 4,458 square meters (47,985 square feet) and is capable of accommodating up to 60 people in the summer, according to the Ministry of Oceans and Fisheries.

“The difficulty of construction differs a lot from the first Sejong research center that was built in 1988,” Kwak said.

The King Sejong Center is located in a relatively warmer area where the sea water doesn’t freeze. Meanwhile, the Jang Bogo research center is located in Terra Nova Bay, Victoria Land, on the southeastern tip of the continent that is covered with ice.

Moving the cargo and supplies on an icebreaker - a heavy-duty ship capable of breaking through ice-covered waters - was the most difficult part of the project, Kwak recalled.

“We had to move everything before the ice got thin because the construction would have been in the summer there [December to February],” he said. “We moved everything from the ship, which was 1.2 kilometers away from the shore, working in two shifts over 24 hours for about 10 days.”

Because construction needs to be done when it is relatively warm, the actual building period from December to March lasted only about 100 days.

White nights also posed a challenge. In the summer months in places south of the Antarctic Circle, the sun remains visible, even at midnight. The employees were only able to rest for a day over two weeks because the construction period was so short.

There were also dangers to Kwak’s job.

In January 2013, after an in-site survey on his way to an American base that was 380 kilometers away, his helicopter was forced to make an emergency landing on a coastal cliff due to worsening weather conditions.

Kwak didn’t know his location, and communication channels were jammed. “I was devastated up until the helicopter was fixed a few hours later,” he said. “My family’s faces popped up in my mind. It was the longest time of my life.”

Kwak has a degree in architecture and has spent more than half of his 25-year career abroad, working in the United Arab Emirates and Vietnam.

“This was the first site that I volunteered to come to while working for [Hyundai], but I don’t want to come back for a while,” he said. “But it would be so meaningful if the Jang Bogo Research Center that we built, in the coldest place on Earth, helped in our nation’s science development.”

Kwak is scheduled to return home with other workers on March 10. Korea is now the 10th country to have two or more base camps in Antarctica.