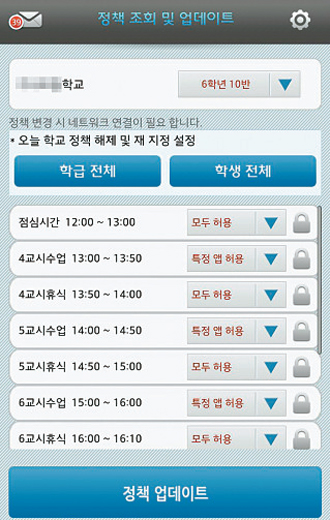 A student-monitoring application called iSmartKeeper shows time settings and different options to control the smartphone use of students. Provided by Netcube Technologies

Middle school teacher Kwon Young-joon is putting on his IT worker’s hat for the next few weeks. He’s been asked to participate in a trial for a new smartphone app.

The sideline job has a direct connection with his teaching job. The app is designed to limit the functions available to students on their smartphones on school premises.

Kwon, who works at Dongwon Middle School in northern Seoul, can choose among six options, including the freezing of all apps, partial restrictions on access to certain predesignated apps, or freezing everything but making calls and sending texts.

The setting will be applied for any duration Kwon chooses. In addition, teachers can be alerted on their own smartphones if any student attempts to remove the application, called iSmartKeeper, from his or her phone.

The Seoul Metropolitan Office of Education has asked 11 Seoul schools including Dongwon to try out the application through this month and will encourage other schools to adopt it afterward.

For advocates of greater individual freedom and the average tech-savvy teenager, this may sound like an Orwellian nightmare come true. But Korea’s government, teachers and parents think it’s time to consider ways to protect school-aged kids from being overly exposed to mobile devices.

But there’s an opposing side that believes digital freedoms should be defended, even of school-aged children, and some of those opponents are already churning out different programs designed to deactivate any system that infringes on that freedom.

The controversy poses bigger questions for the digital era: Should schools address the potential instructional challenges presented by digital devices that students bring into the classroom? And where is the defining line between overreaching surveillance and protecting children?

Dealing with such questions will have far-reaching implications for countries like Korea, one of the world’s most connected nations, which is notorious for its relentless emphasis on schooling and education at the same time.

The number of households with broadband access is 97.5 percent, the world’s highest according to the latest data by the Organization for Economic Cooperation and Development. The nation boasts the world’s fastest Internet connection speeds, the Guinness Book of World Records confirms on its website.

On the non-wired side, more than 67 percent of Koreans have smartphones, again the world’s highest based on a 2012 cross-border survey by U.S.-based researcher Strategy Analytics. And where adult Koreans go, kids and teenagers inevitably follow - and not far behind.

According to the Ministry of Science, ICT and Future Planning, 64.5 percent of Korea’s teenagers had smartphones last year, up from 21.4 percent in 2011. 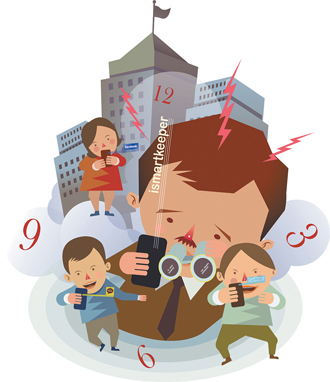 Yet the popularity of these gadgets among teenagers also produces some disturbing statistics.

The number of teens becoming over-reliant on smartphones is only going up, as figures from the Science Ministry showed last year.

The percentage of young people between 10 and 19 who use their smartphones for more than seven hours a day in 2012 was 18.4 percent, a 7 percent increase from the previous year.

An endless variety of apps and content for digital devices has inevitably jangled the nerves of teachers and parents, especially when they detect kids stealthily checking their phones in class or sending texts past midnight at home.

Indeed, young people are no different from older people who increasingly regard their smart gadgets as indispensable tools through which they live and socialize.

But adults in education-conscious Korea see studying as being more indispensable, and they have a history of trying to prohibit anything that seriously distracts children from schoolwork. The prime example is the so-called shutdown policy that prohibits children aged under 16 from playing video games from midnight to 6:00 a.m., even from their own bedrooms. That’s a national law, and online gaming sites have to abide by it.

The iSmartKeeper is the joint brainchild of Han Gyu-sang, an education professor, and the app developing company Netcube Technologies.

Aside from in Seoul, the app is also being tried about by education offices in Daejeon and Gangwon. Pilot projects are under way at selected primary, middle and high schools in their jurisdictions.

An official of the Seoul Metropolitan Office of Education said other ways of dealing with the distraction of smartphones aren’t working that well.

“So far, most schools simply ask students to leave their cell phones in their lockers or to keep them zipped up in their bags,” said Park Jae-won, an official at the Seoul education office. Some schools go so far as to collect them from students.

“But sometimes students just don’t surrender their phones, and there are inconveniences and the possibility of phones being lost while they’re being collected,” Park said.

However, the education office is aware that forcing a restrictive app on students may trigger a backlash.

“What we’re trying to do here is not require all schools to adopt the app but just to promote the service by offering training and lectures, and allowing them to use it if they think it is needed,” the official said.

He added that parents - not students - will have to approve of the app’s use as a prerequisite.

Teachers will ask students with approving parents to download the control application. They can adjust options through a website or the application itself. There is currently no ordinance that governs students’ use of cell phones in schools.

Despite the lack of legally binding force, the iSmartKeeper has gotten a lot of attention, prompting many schools to register for the service during the trial period.

“So far, a total of 600 schools nationwide have expressed their intentions to use the system,” said Professor Han of Gongju National University of Education. “And 30,000 students are now registered for the system.”

The app is only available for smartphones that run on the Android operating system. Han said that he and the app company have completed a new version for iPhone users.

“We are testing functions,” he noted, “and we will launch it soon.”

When asked if the app might not pass Apple’s stricter privacy regulations, the developer explained that the iPhone version has “slightly different features” to ensure that there will be no conflict.

The Android app currently asks for subscribers’ GPS data and information on how many times a person unlocks his or her phone.

The developer emphasizes that the information is used responsibly.

“We use the GPS information to determine whether students are inside or outside of their schools,” Han said.

“This is needed because students sometimes leave early for different reasons. In this case, the restriction will be lifted once a student leaves the school.”

The unlocking data, he said, is used to show a warning signal if a student is accessing their smartphone too frequently.

Thanks to the app’s array of features, Kwon said his school will definitely want to use it after the trial period.

“I think it’s a fair and convenient system,” the teacher said. “I usually set an all-out ban during class hours, but during breaks and lunch time I open access.”

Standing up for students’ rights

The teachers and schools may be falling in love with the app, but there’s another camp altogether.

The rating for the app on Google’s Play application store is a mere 1.5 stars, and it has attracted a host of criticism. Critics accuse the app of invading their privacy and infringing on their individual freedom, describing it as “useless” and “too invasive”

Jeong Eun-jae, 16, maintains an active presence online as an outspoken opponent of the tool.

Another opponent, On Jae-hwan, 15, takes a more aggressive approach and doesn’t hesitate to bring in technology to help his cause.

He said he’s trying to defend students’ rights by developing programs against the app and distributing them through his blog.

“There is a big online community where people, especially young Web users, share information on creating a variety of computer programs and applications,” the student told the Korea JoongAng Daily in a telephone interview.

“So I learned computer programming there, and more than 500 people downloaded my program,” he said.

The middle school student said the “wrong system” forced him to take action.

“The problem of the system is that it severely restricts students’ freedom and requires personal data,” On said. “Schools can tell students not to use cell phones during class hours. But the school policy should not be overly restrictive like this, hastily assuming that we won’t be able to control ourselves.”

As the sides prepare to face off, developer Han admitted there could be a tough battle ahead. He is involved with the issue not only as the app’s creator but also as a parent.

It turns out that those roles showed him both sides of the issue.

“I suggested that my daughter install the app,” he said. “But she later downloaded an app to deactivate iSmartKeeper.”