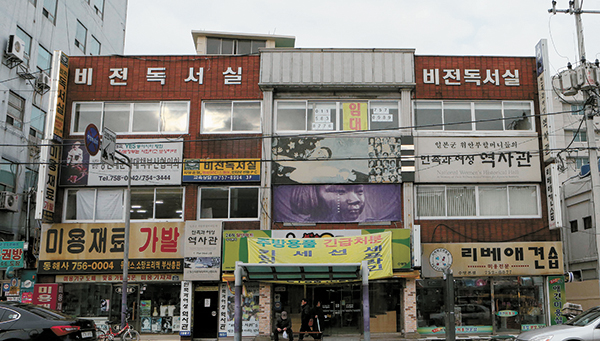 The civic group’s hall in Busan for comfort women is located on the second floor of an old, run-down building. By Song Bong-geun

BUSAN - Euphemistically known as “comfort women,” the Korean women who were forced into sexual enslavement by the Japanese military during World War II have been one of the most talked-about issues in recent weeks.

Another big story was a special exhibition of comfort women comics held as part of France’s Angouleme International Comics Festival. Called “The Flower That Doesn’t Wilt: I’m the Evidence,” the exhibition featured works by 19 Korean comic artists at the largest comic art festival in Europe, which ended in early February.

The guest exhibition, hosted by Korea’s Ministry of Gender Equality and Family, attracted 16,000 visitors over the festival’s four days and reignited the long-standing controversy between Korea and Japan in the international community. News about the exhibition and comfort women erupted in the global media.

But for people like Kim Mun-suk, 87, the recent attention is still not enough.

“It seems like the media hardly covers the issue of comfort women these days,” said Kim, who is the head of the Busan branch of the Korean Council for Women Drafted for Military Sexual Slavery by Japan.

“All these grannies only have a few years to live. What if they are forgotten after they pass away?” she asked from the comfort women historical hall she founded in 2004.

Housed on the second floor of a run-down brick building in Suyeong-dong, southeastern Busan, the hall is the only place commemorating comfort women in the Busan region. It was started by Kim as a place to store and display all the documents she had been collecting.

Collecting and keeping such a vast volume of documents has surely been a daunting task for just one person. The documents are largely papers, and are therefore vulnerable to moisture, but the hall of history doesn’t even have a dehumidifier.

Because space is limited, many of the documents are even stacked in the hallways and in storage. 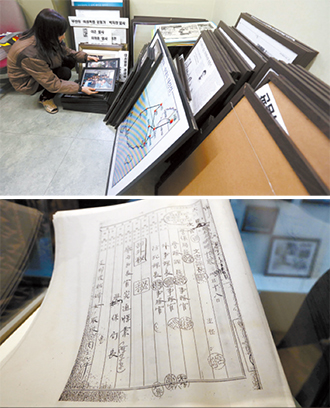 Top: Important documents regarding comfort women are mostly kept by civic organizations, but they usually lack the funds to store the documents properly. Above: A document shows the Japanese military’s forced sexual slavery of Korean women.

Although the city of Busan has provided 7 million won ($6,420) annually to the hall since its second year, that clearly is not enough, so it has raised that amount to 13 million won starting last year. The port city also provides another 6.5 million won for a development fund for women.

But the hall needs 7 million won each month on average, just for operating expenses and organizing educational programs. In fact, it was close to shutting down in 2012 due to financial difficulties.

“Individuals have been doing this work, but I think it is time for the government to step in,” said Gang Haw-suk, 58, the director of the hall.

The Busan city government asked Kim to transfer her documents to a soon-to-be-opened, city-run history exhibition. But Kim refused.

“I don’t want them to be displayed in glass walls,” Kim said. “I’ve been collecting all these documents to educate people about comfort women.”

Fortunately, the Ministry of Gender Equality and Family under Minister Cho Yoon-sun is more interested in the issue of comfort women than previous administrations.

It increased the amount of subsidies for supporting work on the grim era in Korean history to 4.6 billion won, up from 1.9 billion won. About 3.3 billion won is allocated to preserving documents related to comfort women.

Yet the details of the Gender Ministry’s updated plan for comfort women doesn’t include long-term plans for supporting civic groups like the one in Suyeong-dong, Busan, which possess almost all documents about comfort women.

“The government did little for comfort women over the past 20 years,” said Lee In-sun, secretary general of Daegu Citizen Forum for Halmeoni.

Halmeoni refers to grandmothers, but it means comfort women in this context.

The issue of comfort women was first addressed in 1990 by an association of 36 women’s organizations, called the Korean Council for Women Drafted for Military Sexual Slavery by Japan. That group launched the weekly Wednesday demonstrations in front of the Japanese Embassy back in 1992, urging the Japanese government to apologize for the sexual enslavement policy. The protests still continue.

The House of Sharing, a shelter for comfort women, was also launched that same year.

While the Gender Ministry’s increased budgets for comfort women is welcome, Lee and her peers think a more urgent task for the ministry is to understand the comfort women campaigns carried out by civic groups.

“The government never surveys civic groups whenever it allocates budgets for comfort women,” said Lee. “It has no idea which civic organizations are in need of financial aid.”

Important documents are mostly kept by civic groups, but the government knows little about those documents’ whereabouts.

“The Gender Ministry has been focusing on improving the lives of survivors [of sexual enslavement], but it also has to think about how to remember them,” Lee added.

Lee Kyung-hee, who is the head of the Changwon Civic Forum with Comfort Women, based in Changwon, South Gyeongsang, agreed with Lee from the Daegu Citizen Forum for Halmeoni.

“Raising the issue of the violated human rights of comfort women overseas is important, but the government should think about its bigger role,” said Lee Kyung-hee.

The Historical Museum of Sexual Slavery by the Japanese Military, located in Gwangju, Gyeonggi, is probably the best-known museum, having opened in 1998 thanks to donations by citizens and private companies.

But despite having many donors, its interior is quite similar to the hall of history in Busan. There is a tiny storage space of about 66 square meters (710 square feet), stuffed with piles of papers. A few of them are wrapped in bubble wrap, but others are just on the ground, exposed to moisture, insects and temperature change. The building has only one air conditioner.

“One Japanese person gave us military payment certificates and condoms from World War II, but one-third of those items have decayed because we don’t have proper storage facilities,” said Ahn Shin-kwon, the head of the museum.

“Many other documents and other items will be destroyed if we fail to secure proper storage facilities.”

Smaller civic groups face worse conditions. The Daegu-based Civic Forum with Comfort Women has been trying to open a history hall since 2009, but in vain.

The lack of a centralized body overseeing these groups is considered a major drawback. Currently, both the Ministry of Foreign Affairs and the Gender Ministry are in charge of comfort women issues. In addition, local governments and special committees are closely involved in the issue.

Without one single boss, buck-passing is all too frequent.

Take the hall of history in Busan, for example. The city has said it cannot give any more, and that the Prime Minister’s Secretariat, which investigates sexual slavery issues, is responsible. But the prime minister’s committee says it is not capable of allocating funds for this issue because it is a temporary committee.

“We are quite unhappy with government indifference on the issue,” said Ahn Sun-mi, another official at the Korean Council for Women Drafted for Military Sexual Slavery by Japan. “Since we’ve been deeply involved in the comfort women issue and we know about it better than the government, I hope the government will take a bottom-up approach by assisting us.”

Lee Kyung-hee of the Changwon forum also expressed her concern.

“There are no experts in the government who can deal with the issue of comfort women,” she said. “With public servants replaced every six or 12 months, the government can’t make long-term plans for these grandmothers.”