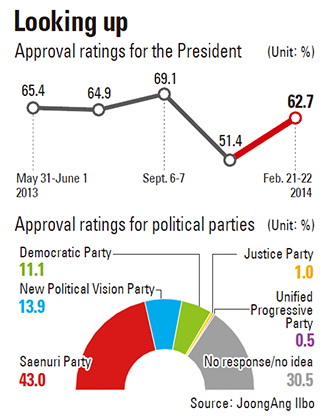 Propped up by the realization of reunions for families separated during the 1950-53 Korean War, the first in more than three years, President Park Geun-hye is entering her second year at the helm today with an upbeat approval rating above 60 percent.

For a Korean president to receive higher approval ratings a year after inauguration than those at the beginning of the term is unusual. A nationwide poll of 1,000 adults by the JoongAng Ilbo conducted on Friday and Saturday showed that approval ratings for the president’s management of state affairs stood at 62.7 percent, with those ratings observed at the highest in June and September, recorded well into the 60 percent range.

The same survey, conducted on Dec. 27 to 28, showed the ratings at 51.4 percent, a mere 0.2 percentage point higher than her polling rate in the presidential election.

Notably, four out of five of those polled responded that the president “did a good job” in regard to policies concerning North Korea. Regarding diplomatic relations with major allies, including the United States and China, 75.6 percent of respondents answered either “good” or “very good.”

A survey of 80 Saenuri Party lawmakers by the JoongAng Sunday, a sister weekly newspaper with the Korea JoongAng Daily, showed that 85 percent of them believe that - out of four key pillars for state management - Park’s biggest achievement over the past year is forming a basis for unification. The other three pillars are economic revitalization, national happiness and cultural prosperity.

“Unlike previous [presidential] administrations, which were either swayed by North Korea or shut down ties entirely, the Park administration successfully drew positive response from the North, meaning her leadership worked,” said Yoo Ho-yeol, a professor of North Korean studies at Korea University.

“President Park has properly selected North Korean policies from past administrations, abandoning what is deemed unnecessary, and setting the foundation for peaceful unification as a basis for state management,” South Chungcheong Governor Ahn Hee-jung, one of the closest aides to former President Roh Moo-hyun, said in an interview with the JoongAng Sunday. “She has also disentangled inter-Korean relations through … trust-building on the Korean Peninsula and [choosing] flexible strategies.”

Experts pointed to Park’s “fans,” which amount to 30 percent of Korean voting population, as the biggest reason for her high rate of success after her first year. The opposition parties’ substandard performance also worked to her advantage, they said. And many voters also sided with the president’s conservative stance toward North Korea supporters and sympathizers, particularly in the wake of a scandal involving beleaguered United Progressive Party lawmaker Lee Seok-ki.

However, the assessment of her ability to properly appoint ministers and other key posts in the government remained gloomy. Only 35 percent of the respondents said they were satisfied in that area, whereas 62.3 percent answered that it was “unsatisfactory.”

“It’s a shame [Park] showed little concession and compromise for the mere sake of achieving the goal of political legislation from a broader perspective,” said a political science professor who asked to remain anonymous.

The public’s assessment of the economic sector - the revitalization of the economy, the creation of jobs and creative economy-related policies - was split. “To invigorate the economy and to bring sustainable growth, the president should prioritize easing regulations, efficient tax system reform and welfare system particularly devoted to the vulnerable social group,” said Song Won-gun, a senior economist with the Korea Economic Research Institute, a private think tank.

The New Political Vision Party, a political group to be led by independent lawmaker Ahn Cheol-soo that has yet to be launched, said yesterday in its editorial to mark her first anniversary that Park “went against the people’s expectations and [was] a huge disappointment.”

“We hoped that the Park Geun-hye administration would maintain confidence and integrate the people,” it said in its written statement. “In politics, the destruction of promises and self-righteousness, and lingering distrust and confrontation between the ruling and opposition parties as a result of a lack of communication has resulted in public distrust; a deepening polarization in public livelihoods; a massive shortage of housing for rent; and an increase in the number of self-employed men going bust. [These points have] proven that the past year incompetently passed by.”

However, the party gave an upbeat evaluation when it came to the president initiating improvement in inter-Korean relations. “We hope reunions and conversations continue, thus creating a basis for peace on the Korean Peninsula,” it said in the statement.

The main opposition Democratic Party came up with 10 cases in which the Park administration had failed in its policies - including the alleged intervention by the National Intelligence Service in the 2012 presidential campaign; digression in her welfare and economic democratization promises; and her poor track record in designating the right people for the right government posts. “President Park Geun-hye, who stresses principles and trust, has abolished or flipped key presidential pledges, such as providing monthly allowances of up 200,000 won ($186) to seniors aged 65 or over, incurring distrust from the public,” it said.