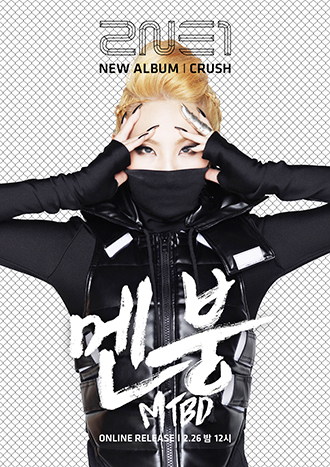 Teaser images of CL, the leader of the Korean girl group 2NE1, and Park Bom were released yesterday, the latest taste of the group’s soon-to-be-released album “Crush.”

The image of CL, whose real name is Lee Chae-rin, features the singer with golden hair done in an up-do, a black leather jacket, long, black nails and the lower half of her face covered.

The teaser promotes the song “Mental Breakdown,” or “MTBD,” on “Crush.” The track was composed by Teddy, one of the strongest producers at YG Entertainment, and was co-written by Teddy and CL. Two tracks on the album reportedly are CL’s solo tracks, and she participated in the production of three other songs including the lead-off single “Crush.”

Bom’s picture promotes the track “Gotta’ Be You” and features the singer, with black hair and long eyelashes, appearing behind a wire fence.

The other 2NE1 members Park Sandara and Gong Min-ji unveiled their teasers Monday. The album will be released today at midnight.