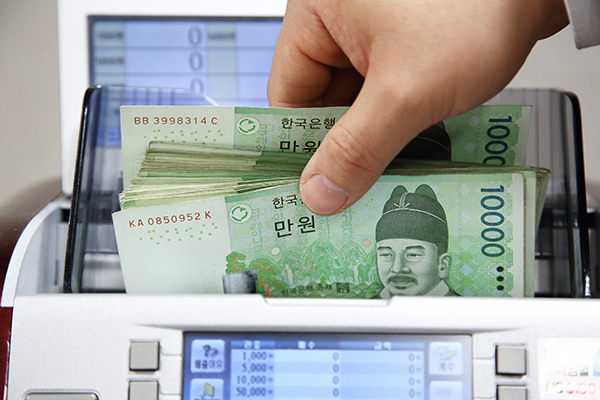 Household debt, including credit card purchases, reached an all-time high of more than 1,000 trillion won ($932 billion) at the end of 2013.

That wasn’t entirely unexpected. The really bad news is that borrowing, which slowed in recent years due to government restrictions, picked up steam at the end of the year.

The Park Geun-hye administration lifted some of those regulations while easing its taxes on real estate purchases to boost the market, which has been in the doldrums since 2008.

The total debt surpasses the previous all-time record set at the end of September: 993.6 trillion won.

The market was already aware that household debt would exceed the 1,000 trillion won mark because it was only 7 trillion won shy at the end of the third quarter of last year.

What surprised many, however, was how fast debt grew in the final three months of 2013. While in the third quarter, household debt borrowed from banks added 2.1 trillion in fresh loans. But, in the fourth quarter, this more than quadrupled and added more than 8.4 trillion won of fresh debt totalling 481 trillion won. 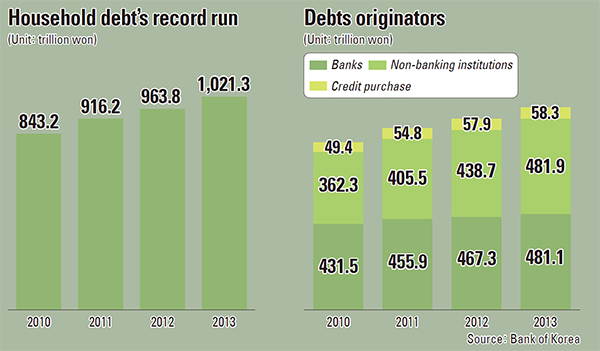 The new borrowing was attributed to the Park administration’s pro-real estate policies.

Last week the Ministry of Land, Infrastructure and Transport announced that it will be lifting two major restrictions introduced in 2006 when the property market was heating up, which caused speculative bubbles to emerge. Reviving the real estate sector has been a major agenda of the Park administration to improve the domestic economy. The sluggish property market has been affecting the domestic economy in various areas including private spending.

While property values have been stagnant or falling, many people who bought homes with huge mortgages have become “house poor” - they own valuable real estate but can barely afford anything because of their monthly mortgage payments. Such financial burdens have caused consumers to tighten their purse strings, while realtors are shutting down with no customers in sight. Meanwhile, with supply falling short, jeonse or long-term deposit prices, rose to almost the same value as the apartments themselves.

But yesterday’s figure showed the darker side of the rebound in the real estate market.

And while mortgage loans from banks grew, so did loans extended by riskier financial institutions.

Loans borrowed from nonbanking institutions grew by 43 trillion won in the last three months of 2013 to 481.9 trillion won. That’s more than the fresh loans extended by banks.

These are financial companies with customers with low credit ratings or low incomes who have limited access to loans offered by banks.

Other financial institutions such as insurance companies and pension funds extended new loans of 9 trillion won, bringing the total of such existing loans to 275.8 trillion won. The equivalent amount of new loans in the third quarter was 7 trillion won. 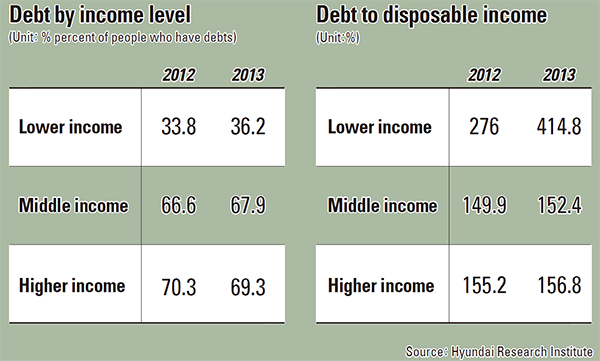 Those loans are mostly used for daily living expenses, including paying bills.

A growth of debt of that kind indicates a decline in the quality of debt.

The central bank has changed its previous stance and has admitted that debt risks have gone up.

Until recently, the government and the central bank denied the possibility of Korea’s oversized household debt wreaking havoc on the nation’s financial market and overall economy. They said that most of the debt was borrowed from high-income households and that the main purpose of the loans was buying homes.

But various reports, including one from Hyundai Research Institute, has been raising red flags.

“The debt-repayment ability, particularly of the lower-income class, has gotten worse, especially since their financial debt has gone up while disposable income has fallen,” said Kim Gwang-seok, a senior researcher at Hyundai Economic Research Institute.

During the same period, the ratio of lower-income households’ debt to annual disposable income more than doubled from 276 percent to 414.8 percent.