On Monday, the Mobile World Congress in Barcelona was all about Samsung Electronics, which unveiled its next flagship smartphone with enhanced features for day-to-day use like a heart-rate sensor and upgraded waterproofing.

According to the world’s top smartphone producer, compared to its predecessor, the new Android-powered device - the Galaxy S5 - has a larger 5.1-inch full HD screen, a better camera with a faster autofocus speed of 0.3 second and a new fitness tracker that provides users with exercise records and a heart-rate monitor. The device is also dust and water resistant.

Rather than focusing too much on applying new technologies to its fifth-generation device, Samsung said what mattered this time was “innovation of essential features for day-to-day use.” 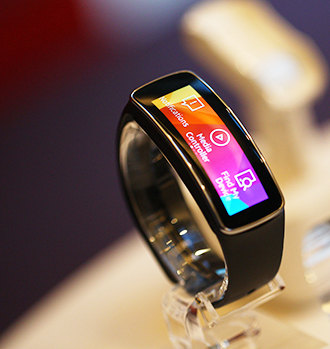 “With the Galaxy S5, Samsung is going back to basics to focus on delivering the capabilities that matter most to our consumers,” said J.K. Shin, president and head of the IT and mobile communications division at Samsung Electronics. “Consumers are looking for mobile tools that inspire and support them as they improve their everyday lives.”

Among the features of the Galaxy S5 is its enhanced S-Health 3.0, a comprehensive personal fitness tracker.

“The Galaxy S5 represents an iconic design with essential and useful features to focus on delivering the ultimate smartphone on the market today through people-inspired innovation,” Shin said.

The high-end smartphone also offers an ultra power-saving mode that “turns the display to black and white and shuts down all unnecessary features to minimize battery depletion.”

The new flagship device was shown to the public Monday evening at the Barcelona International Convention Center, almost three weeks earlier than the introduction date of the Galaxy S4 on March 14 last year.

“We attribute the earlier release to Samsung Electronics’ strategy of lowering marketing costs and maximizing marketing impact by releasing specs during the Mobile World Congress,” said Kevin Lee, a researcher at Korea Investment and Securities. “Also, it’s Samsung Electronics’ strategy to move up its flagship smartphone’s life cycle to make up for lower-than-expected sales of the Galaxy S4 and Galaxy Note 3.”

Lee anticipated Galaxy S5 shipments will reach 22 million units in the second quarter of this year. Worldwide sales of the S5 will begin on April 11, before the launch of the iPhone 6 from its rival Apple, which is expected in the second half of the year.

“While many new hopes for innovations were not realized with this handset, we believe these will eventually be available through a wide lineup of models,” he said. “Overall, we forecast total shipments during the product life cycle to exceed shipments of the Galaxy S4 by 9 percent.”

“Samsung understands that the next generation of wearable mobile solutions must directly reflect of the diverse interests and needs of consumers,” Shin said. “In response, our Gear product portfolio continues to expand with unique devices for a wide range of lifestyles, including the new Gear Fit designed to help those consumers striving to live more fit and active lives without sacrificing their own personal style or their ability to stay connected on the go.”