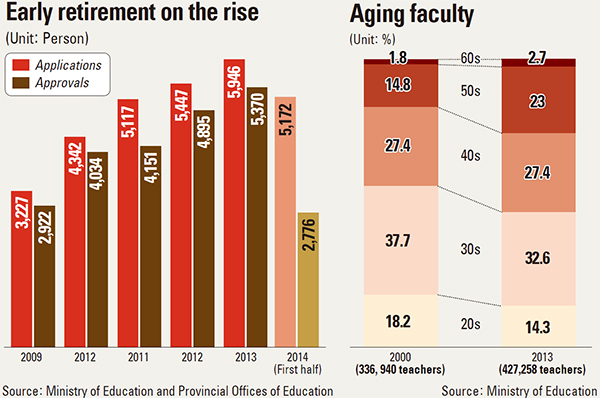 The number of teachers who applied for voluntary retirement this year is estimated to reach its highest level since 2000, according to the Ministry of Education, but nearly half of those applications have been refused due to budget shortages and a lack of available pension funds.

A total of 5,172 teachers requested voluntary retirement for February, the ministry said on Monday.

Teachers who have worked at a school for 20 or more years have the option of voluntarily retiring and receiving a pension. Those who meet that requirement may apply for voluntary retirement twice a year, in February and August.

Considering that the number of applications filed usually increases by 40 to 50 percent in the latter half of the year, about 7,000 to 8,000 teachers are expected to apply for voluntary retirement this year. That’s next to more than 10,000 in 1999, when the retirement age was reduced from 65 to 62.

However, the budget allotted for teachers’ voluntary retirement has decreased.

A teacher who voluntarily retires receives 40 million to 100 million won depending on his or her remaining years until the mandatory retirement age.

According to the 17 local education offices, only 53.8 percent of this year’s applicants were approved for retirement, a stark contrast with the 90.3 percent approved last year.

The acceptance rate for the Gyeonggi Provincial Office of Education was 5.4 to 1. Daegu and Busan stood at 3.3 to 1 and 2.3 to 1, respectively.

If the number of retirements goes down, so will the appointments of new teachers. Only 20 to 30 teachers are set to begin teaching at elementary schools in Seoul this year, about 10 percent compared to last year.

Experts claim that there are a number of reasons for the steep increase this year in voluntary retirements.

Lee pointed out that “teachers in the baby boom generation, born between 1955 and 1963, are coming close to the retirement age.”

Another factor is the possibility that the public officials’ pension act may be revised in the coming months, which could see teachers paying more of a premium but receiving less of a pension. The revision of the act was proposed this year, which likely contributed to the rise in voluntary retirement requests, educators said.

“My pension is my only plan for my later years since I couldn’t save much money,” said one teacher who works in Seoul. “Teachers get anxious every time [the authorities] talk about revising the pension act.”

Many teachers, however, have chosen to retire as a result of becoming disillusioned with the teaching environment.

“Only a handful of students are passionate and listen to what I say,” said one high school teacher. “I lost the confidence and desire to teach in front of such indifferent students.”

Others have mentioned the lack of respect afforded to educators as another reason for why they’ve considered leaving.

“The rights of students are respected while those of teachers are ignored,” added Kim Moo-seong, spokesman for the Korean Federation of Teachers’ Association. “Too much workload on public documentations compared to teaching is also pointed out as a reason [why more teachers want to retire].”

However, as more educators contemplate retirement, worries have grown among parents and faculty that keeping teachers on board who want to retire may lead to a decline in the quality of their children’s education.

“It’s difficult for teachers to be passionate again once they’ve decided to leave,” said Choi Mi-suk, president of Haksamo, an association of parents. “I think parents would be satisfied to see teachers circulate - where a certain number of teachers are replaced every so often by a new set of teachers.”